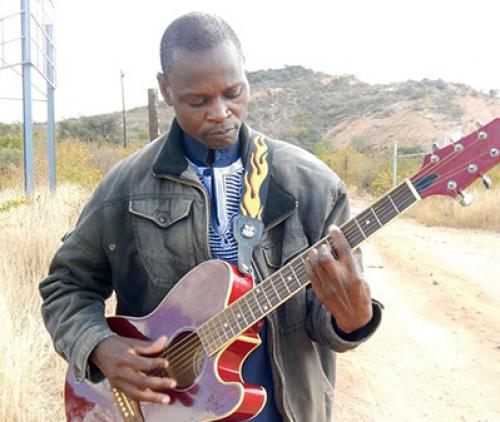 “It is painful that my inspiration and musical father, Oliver Mtukudzi, died before we could meet. My dream was to spend some time with him and tell him how his music inspired me. Despite the fact that he is no longer with us, his spirit will guide me on my musical career, until I reach his level of musical legacy. He might be gone, but inside me he still lives, and he has a special place in my heart.”

Known as Texas in local music circles, Gadabeni is placing the final touches on his fifth album, which is a tribute to Zimbabwean music legend Mtukudzi. “I started listening to the music of Oliver Mtukudzi at a young age before I started playing keyboard in church.  When I first heard of his death on the morning of 23 January last year at the age of 66, I mourned the whole day without eating or drinking anything. I was so hurt that I could no longer think logically. I wanted to attend his funeral at his home village of Madziwa in Zimbabwe but, unfortunately, I did not have enough money to cover my transport and accommodation costs. During the day of his funeral, I closed myself in my room and wept until tears dried up from my eyes.  But with time, the pain is healing slowly, and I decided to heal completely by recording an album in his honour,” said Texas.

The artist, who enjoys airplay on Phalaphala FM and local community radio stations, is not a novice in the music industry. He has played with musical heavyweights such as the late Amon Mvula, Mutendas, Dr Roxley Masevhe and Mukosi Netshiheni. Besides playing keyboards, he is a self-taught acoustic and bass guitar wizard of note.  His first album, Yo Shoma, was released in 2008, followed by Dzuvha, Mu tevheleni and A na ndevhe nga a pfe.

He said about his new album to be released next week: “It is an Oliver Mtukudzi music style that carries six songs: Divha vhubvu hau, Mbingano, Zwi bva hayani hafha, A ne rudo Ngauri ndi Muvenda and Na tombo ndi khwine. I have no doubt that it will be well received by my fans. I am also planning to distribute it here in South Africa and Zimbabwe, so that my fellow brothers and sisters in Zimbabwe should be part of this great tribute to the legend Oliver Mtukudzi.”

Because of the lockdown, Texas is selling his music through social media. He is available on Facebook (Takalani Gadabeni) and on voice call or WhatsApp on 079 596 9420.