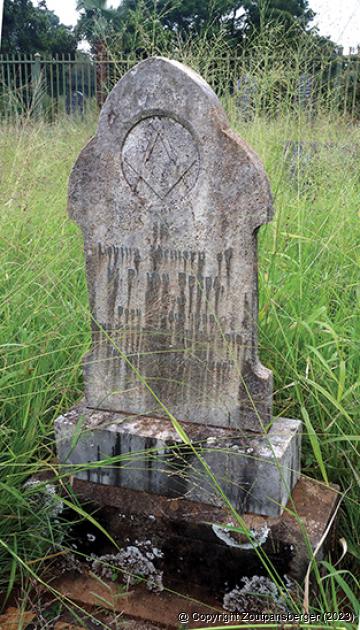 The grave of W.P. van Breda in the Louis Trichardt cemetery.

In the Louis Trichardt cemetery lies the grave of W.P. van Breda. The inscription on the gravestone reads:

Initially, the assumption had been that W.P. van Breda had died in the First World War. In Johann Tempelhoff’s book about the history of Louis Trichardt, he mentions 24 men of the town and district who paid the highest price during WWI (which ended in 1918). Among the names is Corporal W.B. van Breda.

The Van Breda family were well-known in the district at the beginning of the 20th century. They were active in community activities and several were members of the Freemasons. In Louis Trichardt, the Freemasons’ Lion of the North Lodge (no 3640) was consecrated on 18 April 1913, shortly before the war broke out. W.P. van Breda was a Freemason, judging by the insignia on his gravestone.

A person who knows the history of the local Freemasons very well, is Malcolm Tucker. He spent some time the past week paging through the Lodge’s minute books to find out what had caused Van Breda’s death at the age of 23.

The Lodge’s records reflect that nine members were at the front in 1917-1918. The following year, 10 members are listed as being absent because of the war. The list, however, does not include the name of any Van Breda.

Willem Peter van Breda, a farmer by occupation, became a member of the Lion of the North Lodge on 1 June 1916. Because he was only 20 years old at that stage, the District Grand Lodge had to approve of this. His father, Peter and (presumably) his brother, N.J.G.T. van Breda, were also members of the local Freemasons.

The inscription made during the November 1918 meeting of the Lodge provides clarity on what had happened. The meeting started off with a discussion on the “terrible toll the Spanish influenza was taking on the universe.” One of the casualties was Bro Van Breda, “who fell a victim to it in the prime of his life and on the eve of his marriage”.

“It was not a war that claimed the life of a young man, but the deadly flu that swept through the world,” said Tucker.

Between 30 and 50 million people worldwide are estimated to have died from the pandemic that lasted two years. It claimed more lives than World War I, and if higher estimates are to be accepted, perhaps even more than both World Wars combined.

In the northern parts of South Africa, the flu was especially lethal. The Lion of the North Lodge in Louis Trichardt lost three members (out of the 25) who succumbed to the flu.

The official statistics for deaths because of the flu are terrifying. In the Pietersburg district, the flu claimed 37,73 of every 1 000 residents. The district recorded 8 842 deaths. In the Zoutpansberg district, 3 349 people lost their lives as a result of the flu, but this represented only 7,48 deaths per thousand.

In a 1984 thesis on the Spanish Influenza epidemic, Howard Phillips describes the horror and magnitude of the flu in the then Northern Transvaal:

“An equally chilling picture is conjured up by De Burger's Pietersburg correspondent who wrote that corpses of Blacks 'word langs die spoor van die treine gehaal tot bij Messina.” (The corpses of Black people are collected next to the railway line, all the way up to Messina.) The situation apparently turned so bad that, by middle October that year, hastily equipped hospital coaches were to be attached to trains, carrying large numbers of black workers commuting to the cities.

Phillips writes that, in the Zoutpansberg district, the police came across villages where the total population had been wiped out. In the Pietersburg district, branches were placed across the entrance to huts where whole families had died.

The reaction to the pandemic varied, but travelling became increasingly difficult. “Some towns ignored the Government' s recalcitrance and for all practical purposes took the law into their own hands,” writes Phillips. Some towns put up road blocks at entrances and insisted that travellers must produce a certificate of good health, specifically targeting black and coloured people.

“At Pietersburg an official was posted at the station 'to look for sick natives arriving by train', so that the need for an isolation camp could be gauged,” writes Phillips.

The number of people infected is frightening. The estimate for the whole of the country was 2,6 million. The Cape Province had the highest number of cases, with 1,2 million. In the then Transvaal, 632 087 cases were reported, which meant that 35,81 of every thousand people in the province were infected. The Cape Province had the highest death ratio (7,25/1 000), with Transvaal not far behind with 4,53/1 000.

* Phillips, H. 1984. 'BLACK OCTOBER': THE IMPACT OF THE SPANISH INFLUENZA EPIDEMIC OF 1918 ON SOUTH AFRICA. A Thesis Presented in the Department of History, University of Cape Town in Fulfilment of the Requirements for the Degree of Doctor of Philosophy.