1. Fred Jeppe, the man who put the Soutpansberg on the map

In the first of the series focusing on the street names in the Makhado municipality, we look at Fred Jeppe. Some may argue that the Jeppe name is not unique to the Soutpansberg, which is true, but this quiet German-born cartographer played a very important role in the history of the region.

Friedrich Heinrich Jeppe was born on 25 July 1834 in Rostock, Germany. The Jeppe brothers (there were three of them who came to South Africa) arrived in the country in around 1861 and made their living as merchants. In 1866, Fred was appointed as postmaster in Potchefstroom, a job he was seemingly very good at, because two years later he became the Postmaster-General of the ZAR. He even designed his own postage stamps, which circulated in 1870, and he started a mail-cart on the main line between Pretoria, the Orange Free State and Natal.

Fred Jeppe will be remembered as one of the people who were instrumental in issuing the first stamps in the then Transvaal (1d, 3d, 6d and one shilling stamps). He used his younger brother, Julius, to oversee their printing in Germany. Fred Jeppe also drew up the first Postal Law and he was one of the founders of the Royal Philatelic Society in London.

In 1871, Fred Jeppe became Treasurer-General of the republic and became a member of the government’s executive council. When the British took over government of the republic in 1878, he worked as translator and interpreter at the Supreme Court. Interestingly enough, he kept himself busy with the collection of government statistics. This knowledge of the law and demographics served him well in later years (1887) when he was asked to record all the laws of the country.

Fred Jeppe, however, had a major impact on life in the northern parts of the country for a completely different reason – he was one of the first and foremost cartographers in the area. Lindsay Braun, in his book Colonial Survey and Rural Landscapes in South Africa, writes the following:
“Jeppe arguably did more than any other individual to compile maps from the geographical archive and correct them during the era between 1864 and 1899…” 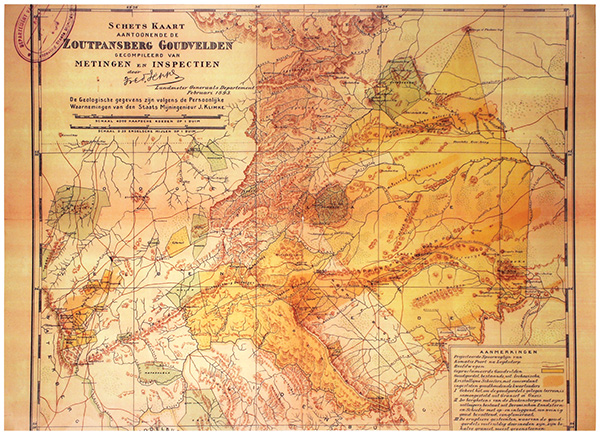 In 1868, with the assistance of German missionary Alexander Merensky, Jeppe compiled the Original map of the Transvaal or South African Republic, which was the first topographic map of the northern parts of what we now know as South Africa. It had no contours or spot heights, but was very accurate and by far the best map of the territory up to that time.  It is, however, clear from this map that the Soutpansberg mountain range was a hugely unexplored area, with little information of the typography and inhabitants available. The former Schoemansdal town, for instance, is marked as having “100 inhabitants”. (Schoemansdal was evacuated in July 1867.)

Jeppe continued to update his maps and included information provided by various explorers, which he always meticulously acknowledged. His depiction of the area north of the Soutpansberg range changed with each new production. He was not afraid to make use of sources such as the missiona­ries active in the area and incorporated maps drawn and route measurements recorded by the Swiss missionary Henri Berthoud of Valdezia, southeast of the mountains.

In 1893, Jeppe published the Schets kaart aantoonende de Zoutpansberg goudvelden (see photo below). This is a remarkable map, because it clearly indicates the perceived gold riches of the region. It still, however, lacked sufficient data on the northeastern side of the mountain, something which Jeppe tried to address in his later maps. In 1897, Fred Jeppe joined the civil service again and became chief draughtsman in the office of the Surveyor-General.

Not long after his appointment, in July 1898, he fell ill from a liver ailment and died soon afterwards. The map he was working on at that stage with the help of his son, Carl Jeppe, was published posthumously in 1899. Jeppe’s map of the Transvaal or South African Republic and surrounding territories was printed on six sheets in Switzerland shortly before the outbreak of the Anglo Boer War. The map, unfortunately, fell into British hands and was used by their forces as the basis to compile the British military maps.

In a tribute to Fred Jeppe that appears on the website of the Southern African Association for the Advancement of Science, he is described as “a modest man and versatile official, who kept out of politics.” Quite a remarkable man. 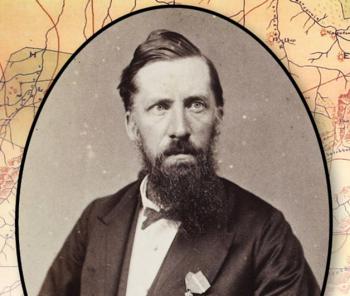