6. The Englishman who helped shape the course of the country’s laws

Louis Trichardt’s street names truly hold many treasures. To try and stereotype the names and put them into “conservative” or “liberal” boxes simply doesn’t work. For some strange reason, the streets were named after a very diverse group of people who, to a lesser or greater degree, added to the special character of the town. The story of Brigadier Ernest Thomas Stubbs is one such example.

The 29-year-old Stubbs arrived in Louis Trichardt around 1907, where he was appointed assistant magistrate and Native Commissioner. He also served as the first chairman of the town’s management board. The town, at that stage not even a decade old, was governed by a management board and the first secretary was Mr O G Bowker. Stubbs later married Alice Bowker, but whether this was the daughter or sister of O G Bowker is still uncertain.

We now have to turn back the clock to find out where Ernest Stubbs came from and what role he played in, among others, the Anglo Boer War and the First World War and why his name keeps appearing in modern-day debates over legislation.

He was born in 1878 in the Queenstown district. His father was TC (Tom Campbell) Stubbs and his grandfather was John Stubbs, one of the British pioneers who arrived in the country in 1820 and settled in the Grahamstown district. The family has its roots in Yorkshire, where they were well-known members of society. John Stubbs and his two sons, TC and William Richard, took up farming at Harrison in the Queenstown district and helped to transform the early character of that part of the country.

When the Anglo Boer War broke out in 1899, TC Stubbs and his three sons served in the British Army. For the young Ernest Stubbs this was not his first experience as a soldier. He had joined the Cape Corps in 1895. The following year, he started working as public prosecutor.

During the Boer War, he served under the ill-fated General William Forbes Gatacre in the Intelligence and Scout section. Stubbs was awarded a military medal for distinguished service. General Gatacre, however, is mostly remembered for the humiliating defeat he suffered during the Battle of Stormberg in the early period of the war.

In 1901, Stubbs was appointed as Inspector and Protector of Natives for the Cape Peninsula and Western Districts of the Cape Colony. During his time spent in the Cape, he was honoured for a rather remarkable achievement as a “government official”. The bubonic plague broke out and Stubbs ensured that the native population of some 27 000 people were moved out of the city to places of safety.

In 1902, the then Col Stubbs moved north to become assistant magistrate and Native Commissioner in Marico. He did duty here until 1907, when he was transferred to Louis Trichardt.

Louis Trichardt’s status was revised in 1912 and a health committee was established. By that time, Stubbs had been promoted to senior magistrate and headed the health committee.

It seems that Ernest Stubbs was the person General Louis Botha, the then Prime Minister of the Union of South Africa, turned to for assistance when the First World War broke out in 1914. He was to mobilise the South African Native Labour Contingent (SANLC) for service in France, South West Africa and East Africa.

In Southern Africa, a native labour force was in place well before the SANLC was officially formed in 1916. Some 35 000 black South Africans had already served as part of a labour contingent in the South West African campaign as drivers and general labourers in 1914. A further 18 000 had served in the East African Campaign. Stubbs probably took part in the war against Germany in South West Africa.

In 1914, Stubbs had to leave his soldiers and return to the northern Transvaal to help suppress the rebellion. The Maritz rebellion, as it was later referred to, broke out at the beginning of World War I. It was supported by men who felt that a Boer South African Republic should be recreated. Many of the leaders, such as Christiaan Frederick Beyers, were strongly opposed to the government’s plans to undertake offensive operations. The rebellion failed and the rebel leaders received stiff fines and terms of imprisonment.

Stubbs returned to Louis Trichardt and only left the town in 1924, when he was appointed magistrate and Native Commissioner in the Rustenburg district. He later also became chief magistrate for Pretoria.

The uniform of Brigadier ET Stubbs.

According to one of his grandsons, Nick Stubbs, his grandfather was a very active member of the Soutpansberg community. Among others, he was a founding member of the local Masonic Lodge and served as master from 1920 to 1922. Initially, the freemasons held meetings in the old school house, but Stubbs pushed for the construction of the first Masonic building.

During his stay in Louis Trichardt, Ernest Stubbs bought the farm Wansbeck near Bandelierkop. The farm was named after a river in England in the area where the Stubbs family came from. He was never a farmer himself, but the farm allowed him to keep horses, which he loved. He was a keen horseman and enthusiastic polo player. Nick recalls how his grandfather forced them to ride horses when they visited, even though not all of the young ones were so keen on riding.

As magistrate of the town, Ernest Stubbs could stay in the official magistrate’s house, situated right across the court building. For many years the red-roofed house stood in isolation while watching over that part of the town. Stubbs was held in high esteem by the government of the day and, among others, he was friends with the then Prime Minister, Jan Smuts. In a letter (see photo) dated 12 July 1922, which is still in the family’s possession, Smuts thanks him for his contribution when His Royal Highness visited the northern Transvaal. It is not stated who the visitor was, but it may have been the Prince of Wales, Edward VIII. “… His Royal Highness thoroughly enjoyed himself, saw all that he wanted and had a good holiday, and this was largely thanks to what you arranged,” writes Smuts.

In 1929, Stubbs was appointed as Chief Justice of the Native Appeal Court in Bloemfontein. As judge he left an important legacy, especially as far as African Customary Law is concerned. In legal circles he is still often quoted, especially his words in 1929 when he argued for “a system of judicature … embodying a simple, convenient form of procedure, stripped of legal niceties and technicalities, designed to meet the needs of the situation … designed to suit the psychology of the native”.

Stubbs envisioned a legal system designed to suit the ‘psychology’ of the African, recreating as closely as possible the atmosphere of the tribal court to which Africans had been accustomed to when submitting their disputes. It also had to offer an affordable forum to settle tribal disputes.

When the Second World War broke out, Stubbs was once again called up to do duty for his country. During this war, he served as director in the Non-European Army Services. He later received the Grant of Dignity as a Commander of the Most Excellent Order of the British Empire.

In a letter written to him by the Minister of Defence, Genl Jan Smuts, he is lauded for his service. “You volunteered for military service: you made the sacrifice for South Africa and for the wider cause of world freedom,” Smuts writes.

From later writings and tributes, it is clear that Stubbs commanded a lot of respect from the troops under him. “It is not so much the knowledge of the African customs, languages, and modes of living that established his avowed leadership; it is the manner in which the man has endeared himself to his followers. It is his love of the people he leads,” writes a certain Ngwenyobomwu. This tribute forms part of the collection of documents held at the Historical Papers Research Archive at the University of the Witwatersrand.

According to his grandson Nick, Ernest Stubbs was well respected for his know­ledge of native affairs. He spoke six or seven of the black languages but, ironically enough, not Tshivenda. During his life he wrote a lot on race relations. One of his essays was titled: “Tightening Coils. An essay on segregation.”

In 1948 Stubbs resigned from the Dominion Party because of its anti-native policies. After leaving Parliament, he came back to Louis Trichardt to spend his last years here. He stayed in Louis Botha Avenue - the same house where Dr Klopper, the dentist, later stayed. Stubbs passed away in 1959, was cremated and his ashes went to his beloved farm, Wansbeck.

Ernest and Alice Stubbs had three children: Marjorie, Jerome and Bertram. Jerome Stubbs inherited the farm after his father’s death and he continued farming there. When he died in 1963, only a few years later, the farm went to his eldest son, Jonathan. Jonathan died in 2013 and the farm was then inherited by his brother, Nick.

The farm Wansbeck, interestingly enough, needs to be owned by at least four family members before it can be sold to strangers. In the original title deed it was specified that it is “entailed” property with the conditions set. The farm has been in the Stubbs family for more than 100 years.

When Ernest Stubbs died in January 1959, he carried the title The Honourable Brigadier Ernest Thomas Stubbs – OBE. The OBE is a reference to the Order of the British Empire that was bestowed upon him as an officer in the armed forces. King George V created these honours during World War I to reward services to the war effort by civilians at home and servicemen in support positions. 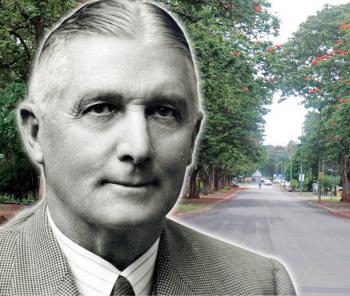 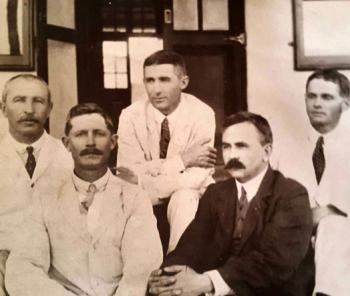