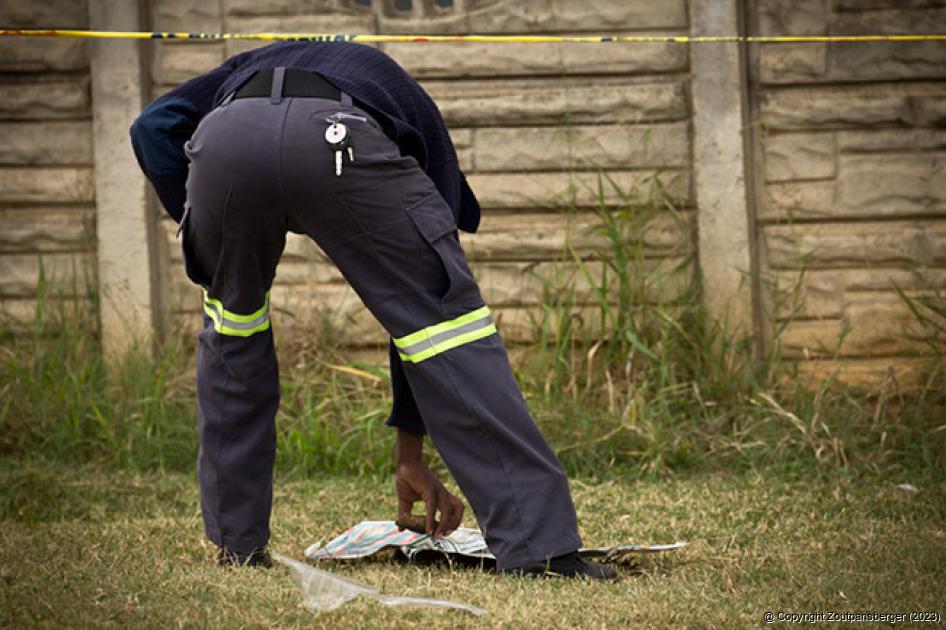 Residents passed by, oblivious to the tragedy concealed under a dirty piece of newspaper next to the road on the corner of Jeppe- and Kort Street in Louis Trichardt on Tuesday morning.

Amidst a strong police presence and with the area having been cordoned off, the newspaper covered the cold and lifeless remains of a foetus from curious eyes. It was covered by a rescue worker shortly after the gruesome find was reported to the police.

More gruesome was how the foetus came to its final resting place. According to information supplied to the newspaper, the foetus was discovered by a resident’s dog that was patrolling the open piece of veld and stream running along Kort Street. Sniffing about, the dog retrieved the foetus amongst heaps of rubbish dumped in the stream and, true to a dog's nature, it dragged the foetus back to its home (behind the municipal testing grounds on the opposite corner). Upon noticing what it was, the horrified dog owner notified the Makhado police.

The baby, according to local police spokesperson Const Irene Radzilane, is estimated to have been between six and seven months old when it was aborted by its mother. She could not confirm whether the baby had been buried alive, or how long the baby’s remains had been in the veld. Further details will depend on a post-mortem examination and will establish the baby's age and sex.

Upon this newspaper's arrival at the scene, the police's dog unit was canvassing the scene and discovered the exact spot where the baby had been dug up in the bushes. Blood, chewed-up plastic bags and a white bucket were found in the trench running through the field. It is suspected that the mother had aborted the baby in the veld and just left it there.

Radzilane has confirmed that a case of concealment of birth has been opened. According to members of the local law fraternity, the charge could be changed to murder if there is evidence that the baby was alive at the time of the birth. The police have urged the public to help them in locating the mother, and anyone with information can contact the station at 015 519 4300 or Radzilane at Tel 082 565 8233.

In the meantime, Past Leonie Mayfarth of the AFM Church here in Louis Trichardt has pleaded with young expectant mothers to rather seek help than turn to such extremes if the pregnancy was unplanned. She attended the crime scene, where she prayed for God's intervention in the situation. "What people forget is that it is usually the mother who could see no other way ... and what the mother does not realize, is that there is a local institution she can reach out to for help," said Mayfarth.

Any local church or clinic can be approached, who will in turn assist an expectant mother. There is also an institution in Polokwane who can facilitate adoptions like Shiloh Home used to do when it was still in operation here in Louis Trichardt.

Mayfarth has invited young mothers, who need help to contact her. She can be contacted at Tel. 084 219 4406. Alternatively, Capt Danelle Fourie of the local police’s family protection unit can be contacted at 082 729 0378 for assistance, information or a referral to a social worker.

A police detective stands close by the leaflet that was used to cover the remains of a baby that was discovered on the corner of Jeppe and Kort Street.