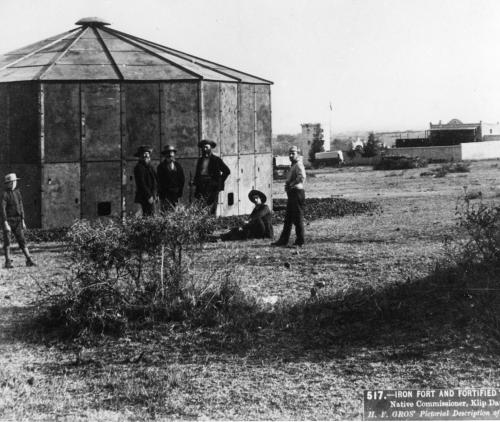 One of the forts (probably Hendrina) at Klipdam, the farm of the Native Commissioner, Oscar Dahl. The photo was taken by HF Gros in around 1888.

The story of the Zoutpansberg’s last three forts

The steel fort next to the Makhado Library is a well-known landmark. Since 1971, it has also been one of our country’s national monuments. This year, the fort celebrates its 130th birthday, but many questions are still to be answered, especially as to what had happened to its two “siblings”.

The origin of the steel collapsible forts may very well lie in Austria, the birthplace of Adolph Zbořil (pronounced “Sbor-shil”). Adolph and his brother, Josef, arrived in South Africa to seek greener pastures in the late 1870s. In 1886, he applied for the vacant position of captain of the Transvaal artillery and in July 1886 he was provisionally appointed as “administrateur en Adjutant van het Rijdende Artillerie en Politiekorps der Zuid-Afrikaanschen Republiek”.

Zbořil quickly realised that the Transvaal artillery and the police corps were in desperate need of modern weaponry and resources. The republic had about a dozen guns which apparently would have served well in an army museum at that stage. With the assistance of the then newly appointed Lt Adolf Schiel, pressure was put on Commandant-General Piet Joubert to acquire new weaponry.

One of the more interesting contributions Zbořil made, was to design “yzeren forten” (iron forts) that could be dismantled and transported to areas where they were needed. The forts were designed in about 1887 and probably built in Austria or Germany before being shipped to South Africa. The forts were made of heavy armour plates and had eight sides. Each section of the fort had to be light enough for two soldiers to be able to carry it around.

Between 20 and 25 soldiers could find refuge in each fort. Whether it was comfortable inside, was debatable. The summer sun baking on the steel and the lack of proper ventilation must have taken its toll on the men.

Three of these forts made their way to the north, and in April 1888 the first one was erected on the farm Klipdam, some 30 kilometres north of the then Pietersburg (not far from the well-known “Wawielbrug” next to the N1). This was the farm of Oscar Dahl, the Native Commissioner for the Northern Transvaal. The double-storied house on the farm was fortified by cannon at two of the corners.

One may ask why these steel forts were necessary, and why the establishment of an artillery unit in the north was important for the ZAR? The answer probably lies in the perceived threat of the native people, especially the vhaVenda. The ZAR president at the time, Paul Kruger, was the commanding officer who ordered the evacuation of Schoemansdal in 1867, following a guerrilla-type war that Makhado had waged against the settlers. Perhaps Kruger, assisted by Joubert, were putting their “big guns” in strategic places.

Just two months before the fort arrived at Klipdam, on 9 February 1888, the ZAR’s “Location Commission” convened at Dahl’s farm to draft new regulations regarding reserves in the Zoutpansberg district. The agenda of the meeting probably included a census of indigenous people, how taxes would be collected and the unwillingness of the vhaVenda king, Makhado, to cooperate.

In a dissertation, US professor Lindsay Braun, writes: “The continuing unsettled state of colonial boundaries for the vhaVenda encouraged efforts to hem Makhado in through security. The establishment of forts ever nearer his capital, encroaching on land he had claimed, was openly provocative … To Joubert and the other local commissioners, this was a vital response to unrest in the area that was driving white farmers off land and generating an uptick in complaints of theft and trespass.”

Joubert tried to engage Makhado in negotiations, especially to convince him to pay taxes, but the vhaVenda king was reluctant to do this. Joubert also tried to convince neighbouring chiefs to pressurise Makhado to submission and, according to Braun, he “sought therefore not only to beacon all the locations of lesser chiefs first, but also to place a fort as close as possible to Makhado’s capital.”

Joubert was reined in by the government, who felt that Makhado should not be provoked and a war should be avoided. “…the State Secretary was alarmed enough to send a telegram categorically refusing to allow him (Joubert) to erect the fort or to demonstrate military force even though they felt that both Makhado’s claims and even Joubert’s counter-proposed location were unacceptably vast,” writes Braun.

For the next decade, the forts moved around from one area to another. The ZAR’s artillery unit, the Rijdende Grenswag, was sent to the north in 1888 and stationed at five strategic spots between Magoebaskloof and the Spelonken. The steel forts were meant for protection of these troops and to serve as a “base camp” for the Native Commissioner. The period was marked by continuous threats to Makhado’s autonomy, but each time Joubert stopped just short of declaring war. When Makhado died in September 1895, the focus gradually shifted to his son, Mphephu.

Based on the inscriptions in the Kampbevelboeke and reports sent through to head office, Fort Hendrina spent the best part of the 1890s on a part of the farm Lovedale Park, not far from the Cooksleys’ store. This was also the regional base for the police corps of the ZAR.

Two of the forts remained at Klipdam and were only dismantled around October 1898. It is also very likely that one of the forts was converted into two or three smaller forts. Back in 1888, Zbořil instructed the government’s arms manufacturer, H Groenewald, to do the necessary modifications to one of the forts.

When the war against Mphephu seemed inevitable, the commander of the State Artillery, Lt-Col S P E Trichardt, was tasked to build a camp at Rietvlei in a triangular format, with a steel fort on each of the corners. The artillery unit was dispatched to the new site. The forts were constructed amid torrential rainstorms.

When exactly the three forts were named, is not certain. The most famous (and only surviving one) was named after Hendrina, the wife of Commandant-General Piet Joubert. The second one was named Fort Botha, but exactly which Botha the name referred to, is not certain. The third fort was referred to as Fort Schutte, and probably named after the Lt Jan Schutte, who was an officer in the unit, somewhere between 1894 and 1898.

The three forts (and the Whitworth cannons that accompanied them) must have played a very important role in the battle against Mphephu that officially started on 16 November 1898. This battle lasted for less than 24 hours and saw relatively little blood being shed. Perhaps the presence of the forts and the artillery unit contributed to the relatively few casualties.

Several historians make reference to the fact that, after the battle at Luatame, Fort Botha (or parts thereof) was moved up the mountain. This was done to stop the supporters of Mphephu from returning to the area. Where this fort was exactly situated, as well as what eventually happened to the fort, remains a mystery. The other two forts remained in the newly proclaimed town, serving as storage rooms for ammunition and food. The police corps also moved to Rietvlei.

Not long after the battle, early in 1899, tragedy struck. Apparently, the burghers tasked with packing the ammunition in Fort Schutte dropped one of the cannon shells. The explosion that followed demolished the fort, killing five of the men. They were later buried with full military honours in the town cemetery. The graves are still visible in the town’s Tree Park, next to the N1.

When the Anglo Boer War broke out a few months later, Fort Hendrina was still in the newly promulgated town, Louis Trichardt. For the first part of this war against Britain, the Soutpansberg did not see a lot of action. Most of the burghers who joined the ZAR’s forces did duty in other parts of the country.

After the British forces had taken over Pietersburg in May 1901, they made their way further north. When the British invaded Louis Trichardt, they decided to move Fort Hendrina back to the old site at Lovedale Park, near Elim. The area was renamed Fort Edward, after the British monarch of the time.

During the last part of the war, the infamous Bushveld Carbineers used the fort as a base for their operations. Several of the officers of this unit were later charged with war atrocities. The infamous “Breaker” Morant and his sidekick, Peter Handcock, were court-martialled for some of the murders and executed on February 27, 1902.

Fort Edward was attacked on a few occasions during the latter part of the war and in one incident the Boer soldiers, under leadership of Cmdt J T Kelly, managed to kill a British soldier and some horses.

After the war, Fort Edward was used as a prison for a short while. In 1909, the site where the fort was situated was used by the South African Constabulary and it was decided to alienate the land. Several other buildings, including stables and a jail, were erected.

In 1969, the fort was donated to the Municipality of Louis Trichardt by W Menne, grandson of J S Cooksley. The fort was moved to the site in town where it still stands. On 23 April 1971, it was proclaimed as a national heritage site.

The future of Fort Hendrina is, however, uncertain. In July this year, the Heritage Monitoring Project called on the public to nominate threatened heritage sites. In response, 37 submissions were received, with Fort Hendrina being one of them.

A special word of thanks to Pétria De Vaal-Senekal for all the information provided and for making her research available.

Lindsay Frederick Braun: The cadastre and the colony: Surveying, territory, and legibility in the creation of South Africa, c.1860-1913

The remains of Fort Schutte after the explosion that destroyed the fort and claimed the lives of five men.

A photo from the collection of MC Heunis shows troops of the Rijdende Grenswacht in front of Fort Schutte.

The forts were moved to Rietvlei, where Louis Trichardt was later established, shortly before the Mphephu war in 1898.