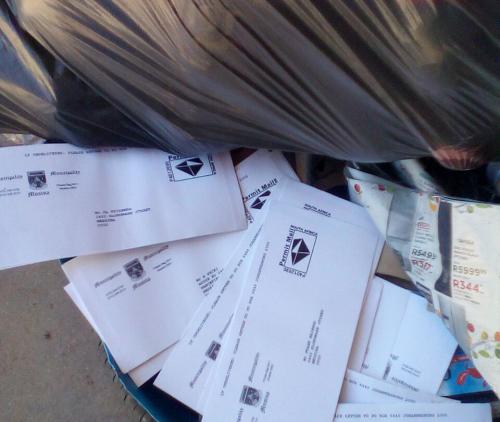 A couple of the municipal accounts the DA in Musina claims they found dumped in a rubbish bin. Photo supplied.

The Musina Municipality has denied claims by local Democratic Alliance (DA) councillor Ernest Makatu that the municipality has stopped sending out municipal accounts to residents.

Makatu further claims that residents are forced to estimate their accounts when they have to pay their monthly bills which makes it impossible for them to budget accordingly, due to the fluctuating water and electricity bills. “It is clear that municipal officials must be held accountable for this illegal dumping, instead of initiating plans to deliver them to the relevant addresses for the residents to get their statements,” said Makatu.

Municipal spokesperson Mr Wilson Dzebu, however, this week refuted the DA’s claims. “The municipality did not and has never stopped sending out monthly accounts,” said Dzebu. He, however, indicated that they did at one stage experience a delay in sending out the accounts between August and November 2017 due to technical challenges encountered with the implementation of the new financial system. In cases where they are unable to physically deliver a resident’s monthly statement, Dzebu said that they have alternatives in place. “We also have emails as an alternative system for those who have registered their email addresses with the municipality,” said Dzebu.

Coming back to Makatu’s claim about the more than 1 000 municipal account they found dumped, Dzebu said: “We cannot confirm if the accounts were dumped, as accounts are sent to the post office for delivery after printing.”