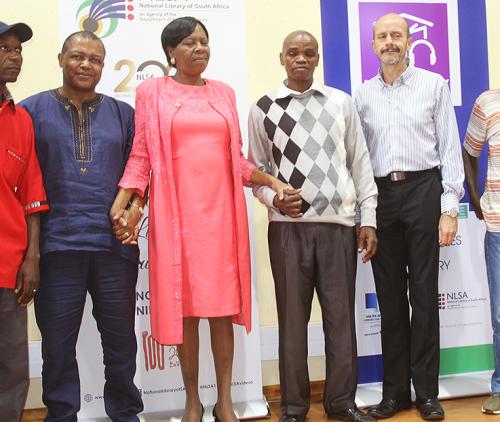 Dr Maisela Maepa (2nd from left), Mr Francois Hendrickz (2nd from right) and some of the blind users during the launch of the mini library.

The blind and visually impaired in Thulamela, who for years could not access information due to the lack of resources, were on Friday on cloud nine as a new mini library, specifically designed for them, was launched.

The facility is part of the 28 new mini libraries for the blind launched countrywide. The launch is an initiative of National Libraries South Africa (NLSA) and the South African Library for the Blind (SALB) who together formed the Mzansi Mini-Library Project, to ensure all blind and visually impaired people across SA have access to their reading material free of charge.

The launch was officiated by Mr Collins Thovhakale, director of library services in Limpopo, Francois Hendrikz, CEO of the South African Library for the Blind and Dr Maisela Maepa, executive director, core programmes of the National Library of Africa. It was attended by many blind people and other stakeholders.

Ms Bele Netshiheni (50) of Thohoyandou, who became blind in 2012, expressed her appreciation towards the library and encouraged those in attendance not to give up on life because of their disability. She said she has been an educator for 23 years until her world fell apart in 2012.

“I lost my eye-sight, my marriage also broke up and I spent a lot of time in isolation lamenting about my life. It took courage to accept my situation and I told myself I should not just sit down as God had a purpose with my life and my condition,” she said.

She added that the new section of the library has helped her a lot. “My research proposal for a master’s degree has been approved by the Senate of the University of Venda, thanks to those involved in seeing to it that we have a facility of this nature. We feel accommodated and would urge others to make use of these resources made available specially for us,” she said.

Dr Maisela Maepa said that they still have a long way to go but are happy that they have started. He said he was also excited because of the positive feedback they were getting from the users of the mini libraries.

“We are now urging you to spread the good news about the new services and resources at this library. Guard jealously against the vandalization of these resources. When you are angry for services, please be rational and manage your anger and do not destroy these scarce and valuable resources,” said Maepa.

Elmon Tshikhudo started off as a photographer. He developed an interest in writing and started submitting articles to local as well as national publications. He became part of the Limpopo Mirror family in 2005 and has since been a familiar name among the newspaper's readers.

Dr Maisela Maepa (left) and Mr Francois Hendrickz look on as Ms Bele Netshiheni demonstrate how a talking computer works, during the launch of the new library.