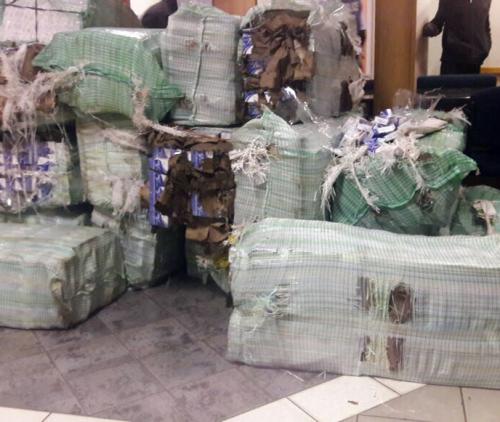 The more than 20 bags containing a huge number of illicit cigarettes that was found at a house in Leeu Street. Police estimate the cigarettes to have a street value of just over R821 500. Photo: Limpopo SAPS.

A cigarette-smuggling syndicate was dealt a major blow on Tuesday when the police raided a residential property in Louis Trichardt, confiscating illegal cigarettes worth more than R820 000.

The Makhado SAPS confirmed the raid at a house in the town’s Leeu Street. “The police received a tip-off from a community member about the illicit cigarettes,” said provincial police spokesperson Lt-Col Moatshe Ngoepe.

Following the tip-off, immediate action was taken. “A joint operation between the Makhado SAPS and the Soutpansberg Town Watch, led by the Makhado SAPS station commander, Col Nyelisani Mabatha, was immediately activated and reacted swiftly, which resulted in the arrest of a 30-year-old female suspect and the recovery of bags containing illicit Pacific Blue cigarettes inside the garage,” said Ngoepe. The police estimate the value of these cigarettes at just over R821 500.

“The remarkable partnership between the Makhado SAPS and the Louis Trichardt community-based crime-prevention structures continues to bear positive and meaningful results … This is a clear indication that, together, working hand in hand in the fight against crime, we can do more,” said Ngoepe.

At the time of our going to press, it was not clear whether the 30-year-old suspect had appeared in court. “The police investigations are still continuing,” said Ngoepe.