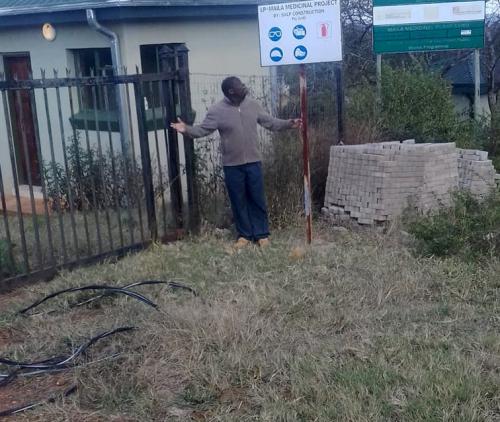 Chief David Nthabalala stands in front of the uncompleted project.

20 Million Herbal Project: Where did the money go?

Community leaders in the Nthabalala area want the office of the Public Protector to investigate financial mismanagement at the Maila Herbal Project. The R20 million project was apparently handed over to the community on 29 March this year, but there is currently little to see at the site.

The Maila Herbal Project was launched amidst a lot of fanfare in 2010 by the then Deputy Minister of Water and Environmental Affairs, Rejoice Mabudafhasi. It was partly aimed at conserving traditional herbs on a 142-hectare piece of land at Maila. The project comprised the establishment of a nursery, laboratory, guard house, medicinal plant garden and a research centre. The medicinal plants cultivated were supposed to be used to treat ailments such as coughs, headaches, fever, constipation and high blood pressure.

A private company, Indigenous Knowledge Systems of South Africa Trust (IKSSA), was appointed by the Department of Environmental Affairs to implement the project. The project was supposed to be completed in 2013, but suffered numerous setbacks. In 2013, more than 200 workers at the project went on strike after allegedly not being paid for two months.

The Department’s spokesperson, Albi Modise, responded to questions earlier this week, stating that “the community can (now) utilise the project, as it has been completed and handed over.” Modise said that the only outstanding issue is the electricity connection to the borehole. “The Implementing Agent’s electrical consultant is working with the Eskom official (Mr Dagada) to resolve the challenge at hand,” he said.

To prove that the project is finished, Modise sent through the project completion and handover certificate.

When Limpopo Mirror visited the area last week, only unfinished buildings, a dilapidated fence and bushes all around the project were found. An electric cable was lying on the ground.

The department’s statement that the completed project was handed to Thovhele Vho Vhutshilo Nthabalala on 29 March 2018 was also denied by the traditional leader. Chief David Nthabalala of Maila village said that the community and different structures had supported the project because they had thought the project would make people’s lives better. “They built and erected a fence, but these are just decorations in the village to fool the passers-by,” he said.

“They promised to finish the job a long time ago. We are still waiting. We are not even sure whether they will honour their promises this time,” Nthabalala said. He accused the government of wasting taxpayers’ money.

Nthabalala said that the people of Maila are very upset about the delay in completing the job. “We, the ordinary people, want to know why there is a delay in finishing the project in our village,” said Nthabalala. “Where is the money which was budgeted for the project?” he asked.

Nthabalala elaborated saying that initially it was agreed that the project should be completed in three years. “The government officials have never come to this area, so how will they know about our problems? The people regard themselves as forgotten and feel that the promises made to them have not been honoured.”

He also blames the Department of Environmental Affairs for the lack of proper monitoring of the project. “We have been doing our job from the beginning, where we monitored the project,” said Nthabalala. “We don’t understand why the project hasn’t been completed by now. Our people are crying, and our feeling is that the department didn't manage their things correctly, somewhere, somehow.”

Efforts to contact the company responsible for implementing the project was unsuccessful. The phone numbers provided were not answered and no e-mail addresses were available.