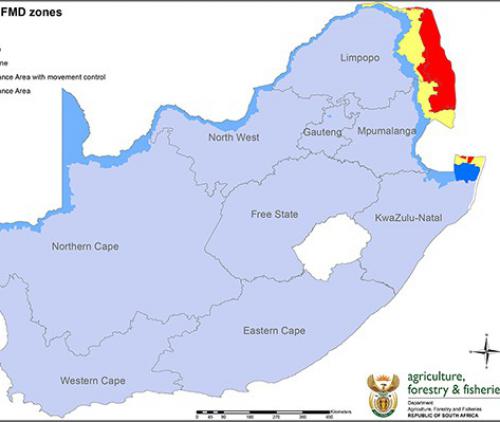 A map of South-Africa’s foot-and-mouth control area. Map by the Department of Agriculture.

The Department of Agriculture, Forestry and Fisheries (DAFF) confirmed positive laboratory results for foot-and-mouth disease (FMD) in cattle in the Vhembe District on Tuesday.

“Samples were collected during a disease investigation after reports of cattle with lameness were received. The positive location is just outside the FMD Control Zone in the Free Zone without vaccination. A team of experts from the Department and the Limpopo Veterinary Services is on the ground conducting further investigations to verify the results and determine the extent of the outbreak,” states the department in a press release. The samples were taken at Sundani Village near Vuwani.

The department indicates that control measures will be determined by the findings of this investigation. “The matter has been reported to the World Organisation for Animal Health (OIE) on Monday (7 January 2019). As a result of this development, the official OIE recognised FMD-free status of South Africa is temporarily suspended,” said the department. Consequently, any exports where FMD-free zone attestation is required, cannot be certified.

FMD is a severe, highly contagious viral disease that affects livestock, with significant economic impact. The disease affects cattle, pigs (domestic and wild), sheep, goats, and other cloven-hoofed animals. “The disease does not affect human beings,” said the department.

Signs of disease may include depressed animals, sores in the mouth of animals causing reluctance to eat and lameness. “Any suspected case of the disease in animals must be reported to the local state veterinarian immediately. The affected area is under quarantine and no movement of animals and animal products is allowed. Farmers further away from the outbreak are cautioned to observe bio-security measures – not to allow any new animals into their herds, and to minimise the movement of their own herds to other farms,” said the department.

The Kruger National Park and the surrounding areas, as well as the northern borders of the country are a declared FMD-controlled area in terms of the Animal Diseases Act. The FMD-controlled area is divided into the following control zones, according to the OIE code (see map).

The Kruger National Park (a national game reserve) is the FMD-Infected Zone. Regular game inspections are performed and any suspected FMD cases are reported to the state veterinarian.

The Buffer Zone comprises the area bordering the western and southern boundary of the KNP—about 350 km long and 10 to 20 km wide. All cattle are vaccinated every six months in the Buffer Zone and inspected (by veterinary services) for FMD every week.

The Surveillance Zone is about 350 km long and 10 km wide and situated to the west and the south of the Buffer Zone. All cattle are inspected every 14 days. No FMD vaccination is permitted in this zone.

The rest of the control zone is situated to the west of the Surveillance Zone as well as an approximately 10km-wide area along the national borders of South Africa with Swaziland, Botswana, Zimbabwe and Mozambique. Cattle are inspected every 28 days. This is an extra protection zone.