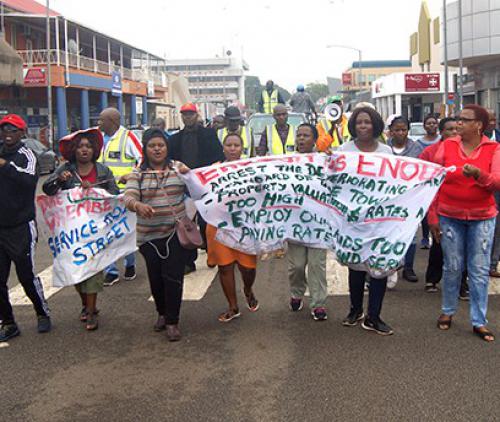 “One aspect which is leading to the negligence of delivery of services is that the municipality is led by councillors and officials who do not live in this town. Do they know what it means to drink dirty brown water or endure dry taps for days?”

Those were some of the concerns raised by the Louis Trichardt residents who held a peaceful march from the show grounds to the Makhado Local Municipality on Thursday. When they got to the municipality to hand in a memorandum, two councillors, Mr David Davhana and John Mamafha, and the municipality's spokesperson, Mr Louis Bobodi, appeared to accept the memorandum.

“We don't need you, but the mayor,” said residents. “You are not going to solve our problems, because you do not live in this town. You are just political heads who care less about our needs; we need the municipal manager to come and accept this memorandum.”

The acting mayor, Cllr John Mamafha, accepted and signed the memorandum of demands. He promised that the municipality would attend to it and provide a response within the stipulated 14 days' period.

The residents' main concern is about a lack of delivery of basic services in the town, and it is stated in the memorandum that they had been presenting their concerns to the municipal management for many years and that not much had been done to ensure that “we have value for our money”.

They demanded that the Makhado Municipality takes back the water management systems from Vhembe District Municipality so that they could always present clean water to residents.

“We are demanding the eradication of bucket water system in this town and demand running water from our house taps,” it read. “All town street lights must be maintained and be functional at all times.”

They want, among other things, that the streets and parks be maintained, for they have grown wild which also means that criminals find good places to hide and to hide stolen property, or else cause accidents. Sewage problems must be attended to promptly when reported to ensure healthy environments.

“Refuse bags must be collected regularly and not left there in the streets for the rest of the day,” they said. “Our streets should be revamped and tarred, because they are damaged. Uncompleted and unoccupied or abandoned houses and shacks must be attended to as they harbour thieves and stolen goods.”

They demanded that property evaluation processes get reviewed as this process was not done properly in the first place, and that prepaid connection fees get reduced to normal rates.

“One other major concern is the negligence of the Information Centre buildings and park which are not maintained,” they said. “We have noticed with concern that the Makhado Municipality senior management and most of the employees are not residents of Louis Trichardt town and it's township, hence there is no interest in the maintenance and development of the town.”

The residents, in conclusion, requested that the municipality provides them with an action plan regarding all raised issues and that they should respond to the memorandum within 14 working days or else they would shut down every activity within the Makhado Municipality, schools, government offices and even close the N1 road, all in demand for the implementation of their demands.

Tshifhiwa Given Mukwevho was born in 1984 in Madombidzha village, not far from Louis Trichardt in the Limpopo Province. After submitting articles for roughly a year for Limpopo Mirror's youth supplement, Makoya, he started writing for the main newspaper. He is a prolific writer who published his first book, titled A Traumatic Revenge in 2011. It focusses on life on the street and how to survive amidst poverty. His second book titled The Violent Gestures of Life was published in 2014.