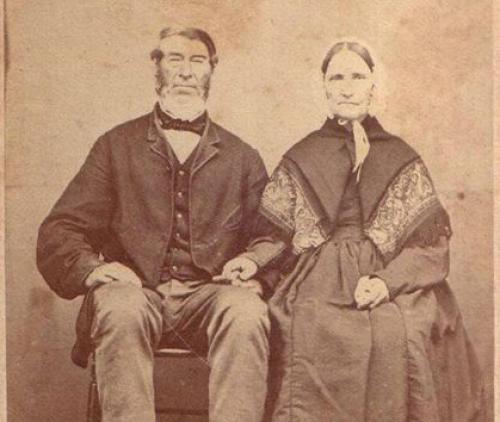 The controversial photo of Potgieter and his wife, apparently taken in the then Delagoa Bay. (Source: Anglo-Boer War Museum)

Could the commandant have posed for a photo?

Two weeks ago, we posed the question as to whether a photo depicting commandant-general Andries Hendrik Potgieter is real. Could it be that the photo, so often used in history articles about the Voortrekker leader, is a fake?

In the first article we looked at the history of Potgieter, starting with his birth in the Graaff Reinett district in the Cape Colony on 19 December 1792 and ending with his death in Zoutpansbergdorp (later Schoemansdal), on 16 December 1852. We also speculated as to which of his four (or five) wives could be sitting next to him in the photograph.

In the second article, we focused on photography. We discussed inventors such as Louis-Jacques-Mandé Daguerre (1787 – 1851) who introduced the daguerreotype process to the world in 1839. We then tried to trace the first southern African photographers and where they were active in the period between 1846 and 1852.

If any photo was taken of Potgieter before his death, it must have been between 1840 and December 1852. The chance of that happening before 1846 is very slim, seeing that this is the year in which the first activities of photographers were recorded, albeit limited to the Cape Colony and the Eastern Cape. The photo can also only be one taken by a daguerreotypist, since the other processes were only introduced after Potgieter’s death.

Where did he travel?

To start off, we need to trace Potgieter’s movements to try and find out if he was anywhere near a centre where a photographer would be active. A further complication (or clue) is that a description alongside the photo, used on many of the genealogical sites, states that it was taken in Delagoa Bay (Maputo). So, we must look at the periods when Potgieter visited what we now know as Mozambique.

Potgieter had his eyes set on Delagoa Bay not long after he and his family left the Cape Colony in 1835. When he visited Louis Tregard in 1836 with a small group of men, he travelled further north, crossing the Limpopo and exploring the land eastwards, including Mashonaland. The idea was to find a route to the coast, but the scouting party had to return to the south of the Vaal river where Potgieter had to deal with attacks from, among others, the Matabele tribe.

In around 1838, the Potgieter group trekked further north and the town of Potchefstroom was established. During that period, the Potgieter family stayed on the farm Buffelshoek at the foot of the Magaliesberg mountain range. One history source says that, in 1840, Potgieter led a small delegation that travelled to the then Lourenco Marques to explore trade agreements with the Portuguese. Not many details of this trip, if it happened at all, could be found.

Potgieter definitely visited Delagoa Bay in 1844. At that stage, he was married to Catharina Elizabeth Jacobs (born Erasmus). Whether she joined him on the journey is not clear but seems unlikely. In Lourenco Marques, the small Boer delegation met with the Dutch business representative, Jean Arnaud Smellekamp, and the Portuguese governor, AJ Teixeira. Potgieter, by then, realised that a trade route via Natal was unlikely and that the only option to reach the coast would be to the east.

Potgieter could possibly have encountered a photographer who disembarked at Sofala (on the Mozambican coast). A British photographer, Charles Shepherd, travelled to Calcutta in India in 1840 to take photos there. He may have stopped in Delagoa Bay. The same goes for other amateur and professional photographers operating in the early 1840s. The first “real” evidence of photography in Mozambique is in 1845 when a French photographer, E Thiésson, visited Sofala to take photos of the native people.

In the next few years, Potgieter moved between Potchefstroom and Andries Ohrigstad, the town he established with the help of a Dutch merchant, Gregorius Ohrig. This was supposed to be the focal point of trade to the east but, unfortunately, did not survive for very long. An outbreak of malaria caused the residents to abandon their homes and resettle in the nearby Lydenburg in around 1848.

Some sources refer to delegations that visited Delagoa Bay in the periods between 1845 and 1851, but no mention is made of Potgieter’s accompanying the groups. These visits could only take place during the winter months, as malaria and tsetse flies along the route made it too dangerous to travel during rainy seasons.

At the end of 1847, Potgieter is recorded as having travelled to Soutpansberg with a group of 230 people. They settled in the northern parts early in 1848 where a new town, Zoutpansbergdorp, was established. Potgieter himself set up a shop and quickly established a monopoly as far as the trade in weapons and ammunition was concerned.

Potgieter, still considered to be the commandant-general, tried to attend to governance matters, but he complained about his deteriorating health. On 13 November 1848, he did not attend the big “Volksraad” meeting in Potchefstroom, saying that he was too sick to travel such a long distance.

In December 1849, Potgieter wrote a “peace” letter to Andries Pretorius from his home in the Soutpansberg. Judging from the letters Potgieter wrote in 1850 and the early parts of 1851, he stayed in the northern parts of the country for most of that period. Only in early 1852 did Potgieter venture south again to attend the important meeting in Rustenburg to clear the air between him and Pretorius. This historic meeting took place on 13 May 1852.

For the remainder of 1852, Potgieter was very active despite his deteriorating health. On 13 May 1852, he was in the Soutpansberg to get the go-ahead for a proposed treaty with the Pretorius group. In August, he helped establish a town near Makapanspoort, called Vredenburg (later renamed Potgietersrus and now Mokopane).

In August 1852, Potgieter was involved in the war against Chief Sekwati. A month after the battle, on 24 September, he returned north. He was so ill that he had to stop over in Warmbaths (Bela-Bela) where he was visited by reverend Neethling and the well-known Rev Andrew Murray.

On 15 December 1852, Potgieter was back at his home where he was visited by a representative of King Mzilikazi, leader of the Matabele. They arrived just in time, as Potgieter died the next day.

Time for a photo?

In theory, the commandant may possibly have encountered a roaming photographer during the last decade of his life. The best chance of something like this happening would have been between 1847 and 1852. What is extremely unlikely, however, is that a travelling photographer would have loaded all his equipment and chemicals on a wagon and travelled as far as the Soutpansberg. Such a journey would take several months, and the initial investment would have been considerable.

An unconfirmed source states that the first photographic studio in Potchefstroom was opened in 1850 by Eduard Pavey. This is not mentioned in Dr AD Bensusan’s book about the history of South African photography, but it is possible. Potgieter was in the vicinity of Potchefstroom in 1852, but whether he was accompanied by his wife is not clear.

If a studio was operating in Potchefstroom before Potgieter’s death, the photographer would have been using the daguerreotype process. As mentioned in the previous article, these photos are easily identifiable. Daguerreotypes are produced by adding a silver layer to a highly polished sheet of copper and sensitizing it with iodine vapours. The final product is a very sharp and detailed “hard” print that needs to be viewed at a slight angle to minimize the glare.

To determine exactly what kind of process was used to take the photo of Potgieter and his wife, it helps to try and trace the source. On the genealogical sites where the photo is used, the source is given as the Anglo-Boer War Museum, situated in Bloemfontein.

The museum was contacted and asked about the origin of the photo. A representative replied, confirming that the museum has the photo in its collection. Unfortunately, however, no details about its origins or who had donated it to the museum are available.

It is a carte-de-visite!

Because the photo, at face value, resembles a carte-de-visite, the characteristics of these photographs were sent through to the museum. Cartes-de-visite were usually printed on a stiff carton and the most popular size was 4x3 inches (roughly 10cm x 7,6cm). Over the years, these albumen prints would turn yellow. The age of the photo can also be estimated by looking at the carton paper used. The older the photo, the thinner the paper.

Ms Etna Labuschagne, photo curator at the museum, responded by confirming that the photo in Bloemfontein is definitely a carte-de-visite.

This provided a problem, because as was mentioned in the previous article, cartes-de-visitewere only patented by the French photographer Andre Adolphe Eugene Disdéri (1819–1889) in 1854. In South Africa, it became popular in the 1860s.

The last option to consider is whether the daguerreotype could have been copied at a later stage. Daguerreotypes have no “negative”, which means the original photo needs to be re-photographed. This is not an easy process and would not have been practiced widely in the late 1800s or early 1900s. The final product would also not have resembled a carte-de-visiteso closely.

Perhaps a final remark on the authenticity of the photo is from the biography on Potgieter written by Dr Carel Potgieter and NH Theunissen. In the last chapter of the book they remark that no portrait exists of the Voortrekker leader because he lived according to the biblical mantra saying that “You shall not make for yourself a carved image, or any likeness of anything that is in heaven above, or that is in the earth…”

Vanity might possibly have prevailed, and the commandant might have been persuaded by his wife to sit for a “likeness”, but this is highly unlikely. The photo of Potgieter so widely used only surfaced in the last few decades. No photos of him appear in earlier biographies and articles depicting his life.

Theoretically, therefore, the photo might be that of Andries Hendrik Potgieter who died in the Soutpansberg on 16 December 1852, but practically, this seems highly unlikely.