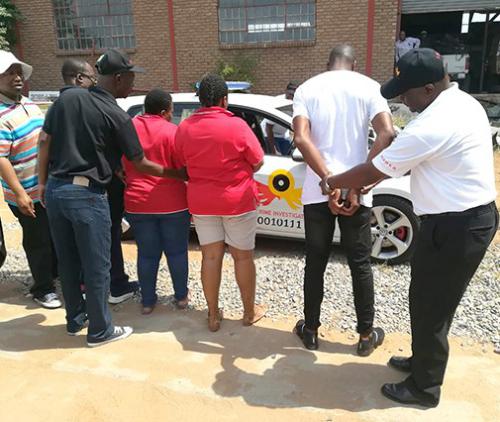 The four officials who were arrested at the Thusalushaka Testing Station in Musina on Tuesday. Photo: Limpopo Hawks.

The Hawks in Limpopo arrested four officials at a vehicle testing station in Musina on Tuesday on allegations that they had fraudulently issued roadworthy certificates for vehicles that they had never physically tested.

The four, three vehicle examiners and a cashier, were arrested at the Thusalushaka Testing Station and will be facing charges of fraud and corruption. “It is alleged that the officials colluded in using the identity particulars of a 60-year-old man to generate roadworthy certificates for scores of vehicles that were never brought to the testing station for examination. Investigations, however, showed that the man was not even aware that his particulars were being used in this manner,” said Maluleke.

During the arrests, documents and computers were seized during the raid at the testing station. “A similar raid was conducted at the same testing station in December last year where two officials were arrested. They were released on bail and are expected to make another court appearance on 29 April,” said Maluleke.

The four officials arrested on Tuesday appeared in the Musina Magistrate’s Court on Wednessday. They were vehicle examiners Moeketsi Diamond (52), Kgabo Kgole (28) and Zwiitwaho Netshidaulu (33). The cashier is the 36-year-old Thabang Maluleke. The four are to remain in custody until their next apperance on 3 April.

“Vehicle roadworthiness is one of the major contributors to road crashes and fatalities in South Africa. The raid will assist in reducing this threat in the forthcoming Easter period,” said Maluleke.