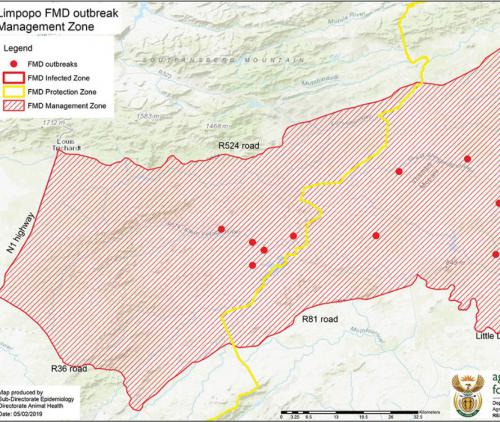 The Limpopo foot-and-mouth outbreak management zone. Map supplied by the Department of Agriculture, Forestry and Fisheries.

The Department of Agriculture, Forestry and Fisheries (DAFF) has declared the end of the foot-and-mouth disease (FMD) outbreak, as no new cases of FMD have been detected in the declared disease-management area since February, and more than three incubation periods have lapsed with no new cases being observed.

This is according to a joint statement issued by the DAFF and the livestock industry. “The battle is over, but the war continues,” reads the statement.

South Africa experienced an FMD outbreak in the high-surveillance area of the FMD-free zone in Limpopo’s Vhembe District on 7 January this year and, as a result, lost its World Organization for Animal Health (OIE) recognised FMD-free zone without vaccination status. The DAFF, however, stated that intensive surveillance had demonstrated that the virus was no longer circulating. “However, control measures remain in place in the area. The farming community and public are urged to remain vigilant,” says the DAFF in the statement.

Tuesday’s announcement follows a ministerial visit to the Vhembe District in April. DAFF minister Mr Senzeni Zokwana led a high-profile delegation to the affected communities to express their heartfelt appreciation to the farmers and all other parties that worked with the DAFF to contain the outbreak and resolve the situation.

The statement goes on to state that the DAFF successfully prepared and submitted a dossier to the OIE, applying for a containment zone. This application does not form part of the normal OIE processes for zoning and thus will not be considered by a formal sitting of the OIE’s scientific commission but will rather be considered through an electronic round-robin process. “The DAFF is hopeful for a positive outcome of its application in the near future,” reads the statement.

In the meantime, China has lifted its ban on wool. “The Department has successfully negotiated market access for safe commodities to most of the trading countries. The most recent success was China lifting their ban on wool imports from South Africa. Negotiations are still underway for beef exports to China, and the DAFF is in the process of confirming dates for the next inspection visit by the Chinese veterinary authority,” reads the statement.

In conclusion, the DAFF urged people not rest but remain vigilant and continuously seek to improve biosecurity procedures and measures to protect animals and people against the spreading of disease.