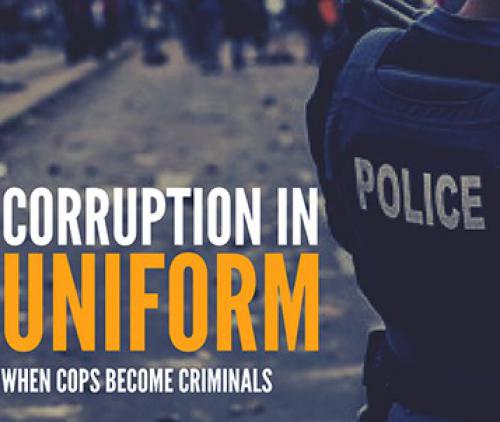 Report on corruption in police reveals grim state of affairs

Corruption Watch released their Corruption in Uniform report last week, which looks at the alarming levels of corruption in policing in South Africa. Since the organisation’s inception in 2012, some 1 400 members of the public have felt concerned enough to share their experiences of corruption at the hands of the police.

According to the report, the leading categories of corruption from these reports are bribery (33%), abuse of power (23%), and dereliction of duty (18%), all of which can have severe consequences for those seeking help and support from the men and women in uniform entrusted with protecting and serving the people of this country.

The most implicated police officials in the report are detectives and investigating officers, who are frequently aided by other colleagues. The statistics according to rank are detectives and investigating officers who make up 26% of the total, station commanders (15%), followed by captains at (12%), constables at (10%), whilst the remainder includes sergeants and warrant officers, among others.

Corruption Watch states that the stories shared by community members across the country amplify the lack of confidence in law enforcement, and the damaging effect when entrusted power is abused. Among these are reports from people who have been subjected to threats and attempts to extort money. A disturbing trend is the increasing reports from women of attempts to extort either money or sexual favours, also known as sextortion, and frequently from those in the most vulnerable of positions.

Equally damaging are the cases where police officers have made dockets disappear for a bribe, suggesting collusion with the very criminals they are supposed to be putting behind bars, who are then left to continue terrorising the public unhindered.

“This report is the story of almost every woman, man and child in our country, and that is the most troubling fact,” says Corruption Watch researcher Melusi Ncala, the project manager. “To think that 25 years later, in a democratic South Africa, an institution that is supposed to protect and serve us all operates in a binary way when we call for help is disconcerting at best and very dangerous at worst. Regardless of our gender, race, class and proximity to political power, we all have the fundamental human right to feel safe in our homes, places of worship, offices and streets.”

Ncala said citizens needed to take heed of what over 1 400 whistle-blowers had said. “Let us work collectively, with the police, to shape and mould the South African Police Service into an institution of accountability and transparency, an institution that is corruption-free and whose men and women are concerned with protecting us all and not lining their pockets or aiding and abetting a system of patronage.”

Corruption Watch does advocate for certain positive steps to address the systemic corruption in order to restore public trust in the policing sector. They feel strongly that political will and a commitment from the sector itself need to be there to deal with the perpetrators of corruption within their ranks. Room also exists for multi-stakeholder engagement to provide solutions and support for bringing guilty parties to book, and providing solutions to closing the gaps that make corruption possible.

In November 2018, Corruption Watch was selected as one of the four winners of the Google Impact Challenge, a nationwide competition aimed at improving inequality through innovation. Corruption Watch’s campaign, which includes the development of a tool called Know your police station, provides an opportunity to increase public participation in exposing and reporting on police corruption and misconduct, and to improve transparency in the South African Police Service by providing key data and information about how police stations operate. Apart from addressing corruption, the aim is also to build trust in the police by highlighting exemplary performance.