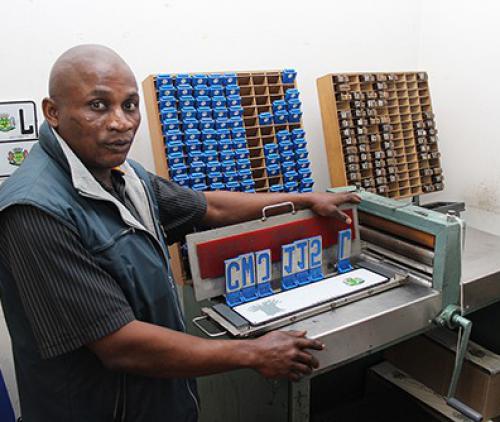 Elvis Tshikwama from Rainbow Midas in Louis Trichardt shows how number plates are manufactured in accordance with SABS specifications.

Is my number plate legal?

Traffic fines have become big business in certain parts of the country, with municipalities budgeting on collecting millions of rands from motorists not complying with the various laws. Some municipalities even outsource the law enforcement to private companies to help catch the violators and to collect the money. It is therefore important for motorists to know what the law expects from them and how to avoid being fined for “technicalities”. One such technicality is the vehicle licence plate requirement.

The licence plates affixed to your vehicle serve various purposes. The plates help identify the vehicle, which becomes more and more important in an era where cameras along the national roads get used to identify vehicles. The data collected is used for purposes such as charging toll fees or to monitor average speeds. The plates need to conform to certain standards and need to be difficult to duplicate or forge.

The South African Bureau of Standards (SABS) is currently the only organisation in the country that independently tests and certifies number plates. This effectively means that if the SABS’s logo does not appear on the plate, it is illegal and the motorist will very likely end up paying a fine. But the logo is not the only thing to check when trying to establish whether your number plate is legal or not.

Mr Garth Strachan, acting CEO of the SABS, explains that specifications for number plates are determined by the National Road Traffic Act No 93 of 1996. Although amendments have been made to the Act that were published in 2015, the Amended Act has not been promulgated yet. “Each province in South Africa has a different background design and a specified font for number plates,” says Strachan.

According to national regulations, there are only three legal number plate sizes and each must be embossed with letters or numbers of a specific size. A different size may be used on the front and the rear of a vehicle. The three sizes are:

The way the plate is affixed to the vehicle is also regulated. The plate may not be stuck to the body of the car using double-sided tape or using standard bolts and nuts. Section 35 of the Road Traffic Act requires the plate to be affixed 20 millimetres from the edges, using either 4mm rivets or one-way, self-tapping screws.

If a holding bracket is used, such a bracket must comply with the provisions of SANS 973 specifications. It is again necessary to check for the SABS-certified logo on the carrier.

Who can make these plates?

Not just anyone can make number plates. “The Act requires that anyone manufacturing or selling licence plates must be registered with the relevant provincial Department of Transport,” says Strachan. The regulations in the Act distinguish between manufacturers of plates and embossers. In both cases the equipment used to make the plates, as well as the material used, needs to comply with SABS standards.

When a number plate is made, it must have a certification mark that contains the name or trademark and batch number of the supplier.

Use a reputable dealer

In Louis Trichardt, Rainbow Midas is listed as a SABS-certified manufacturer. The company is licenced to manufacture number plates for vehicles registered in Limpopo and in Gauteng.

“It costs a fair amount of money to adhere to all the necessary legislation, but we believe it is necessary,” says Ed Christie, manager of Rainbow Midas. Christie explains that they need to follow strict rules when manufacturing and selling plates. They regularly get audited by staff of the SABS and need to ensure that they comply with the standards.

When a customer buys a number plate, all documentation, such as the vehicle’s registration certificate and the owner’s identity, need to be checked and captured. If a query should arise later, the manufacturer needs to provide proof that the information had been verified. This is especially important in an era where number plates are cloned and used on stolen vehicles.

Christie encourages residents to ensure that they make use of a reputable dealer when having number plates made. This will make it more difficult for criminals to operate, he says.