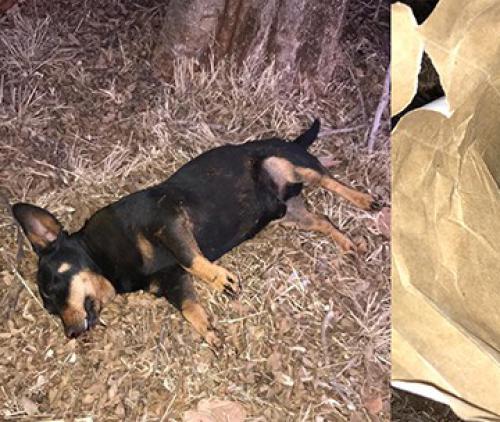 Because the Makhado Municipality is not doing its job regarding the removal of animal carcasses, these two dogs were left to rot in the park next the Forestry road for three days last week. Although it is not their job, the local SPCA removed the carcasses when informed of the problem. Sadly, the owner of the dogs knew they were lying dead in the park. Photos supplied.

The Louis Trichardt SPCA has once again reminded members of the public that attending to reports of stray animals is not the SPCA’s job. Stray animals are the responsibility of the Makhado Municipality.

Back to the problem of stray animals. Despite the fact that their job does not entail attending to stray animals, Alicia said, some residents become very angry when the SPCA is unable to assist. “Just last week, three of our committee members and the State Vet were notified of dogs fighting in town. While we were attending to these hurt animals, we were notified of more stray dogs by a member of the public. When we said that we would not be able to attend to the problem right away, this member of the public became rude and quite offensive towards us,” said Alicia.

According to Alicia, stray dogs specifically are becoming a huge problem in town. “Owners simply do not take the responsibility to make sure their animals are safe in their yards,” said Alicia.

Regarding the above, Alicia said that the public could assist them with stray animals in various ways. “These stray animals are not always easily caught; believe us, we have tried,” said Alicia. She urged people, if possible, to bring the stray or injured animal to the SPCA themselves. “We definitely do appreciate it when people take the time to inform us of a stray animal, but so often when we reach the area in which the animal was last seen, it is no longer there,” said Alicia.

In cases where an animal needs saving, Alicia urged the public to phone inspector Lawrence Khodobo at Tel 082 965 5151 or one of their committee members as soon as possible. “We cannot turn a blind eye to any animal in danger and will always try to help as soon as possible. We appreciate all notifications we receive from the public,” said Alicia.

As for stray animals, Alicia said, the public must start to put more pressure on the municipality by reporting all stray animal cases and carcasses in the street to Mr Bernard Mokiri (stray animals) at 078 802 9412 and Mr Phineas Ndwakhulu (carcass removal) at 078 802 9414. “Hopefully, they will start doing their jobs when inundated with calls and not just rely on the SPCA to do their jobs for them!” said Alicia.

In conclusion, Alicia reiterated the fact that their inspectors’ duty still lies first and foremost with animal-cruelty cases, but that they are always willing to assist if he is not out on a call. “If we had to attend to each call regarding a stray animal, it would be impossible to get to all the cruelty cases we need to attend to as well,” said Alicia.