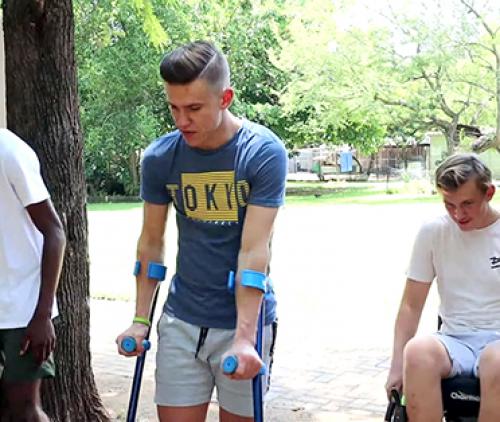 Part of  the24-hour challenge Koben Hofmeyr (middle) set himself  to be away from his wheelchair was that friend Ethan Herman (right) would spend that time in his wheelchair. Left is one of his other friends who assisted Koben with his challenge, Tondi Sadiki.

On 20 November 2019, Koben Hofmeyr from Louis Trichardt posted a video to his YouTube channel, and in that video, he set himself his biggest challenge ever. The challenge involved leaving his beloved wheelchair, called “Shrek”, for a period of 24 hours.

At the age of 15, Koben was left wheelchair-bound after suffering a debilitating neck injury during a school rugby game in May 2018. He has since made it his goal in life to walk again, free of his wheelchair.

Koben decided to film his 24-hour challenge and uploaded the short video to Youtube, detailing his experience. The video was uploaded on 12 January and can be viewed via a link to his Facebook page, Koben Hofmeyr.

On the day of filming, Koben and some of his friends had many plans for the challenge. These plans included, among others, motorcycling, driving, fishing, shooting and swimming.

The video starts with Koben speaking to one of his good friends who played rugby with him, Tondi Sadiki. They speak about the pros and cons of the challenge and after that they are off.

First stop is at a farm where they drive around on quadbikes for a few hours with Duhan Pretorius. After a sweaty time on the farm, they return home where they cool off in the pool, and the first 12 hours have been completed.

The following day the time comes to complete the next 12 hours of the challenge, and so they start off with Koben trying out his ability to drive. With great success he drives for quite a distance until indicating that he feels that he has done enough.

Koben and his friends quickly get on their way to the next challenge, clay-pigeon shooting. Extending the time of 24 hours to 31 hours, they also decide to do some fishing for the last part of the challenge. Koben manages to catch seven fish, while his friends catch more.

“I was immensely tired, both physically and mentally. My muscles were numb and spastic from all the pain. Still, I am proud of my performance and that my medical limitations did not stop me. I feel awfully excited now after trying it and, to be honest, I look forward to pushing myself again,” Koben later told the Zoutpansberger about his experience.

Koben would like to motivate as many people as possible to push themselves with their capabilities to become better. “Blessed are those who do not have setbacks, but strong are those who overcome their setbacks. You set your own limits, and every setback is a hidden blessing. And even if we have the chance to admit that life is unfair, at least we are fortunate enough to have one,” said Koben.