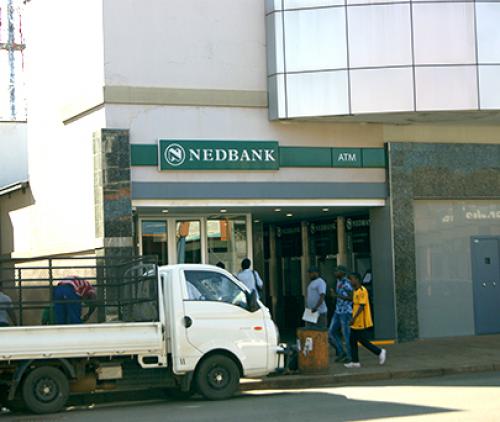 Only ATMs were operating on Monday morning after it was discovered that thieves had broken into Nedbank.

Thieves get away with R2 million during Nedbank heist

Rumours spreading through town since Monday morning that a large amount of cash was stolen from a bank in Louis Trichardt seem to be true. The police confirmed that more than R2 million was stolen from the Nedbank branch in town.

When Nedbank’s doors remained shut on Monday morning, with only the ATMs outside working, the gossipmongers started working. At first the whispers claimed that thieves had broken into the VBS Mutual Bank and the local Nedbank branch.

The general suspicion was that the burglars could have gained entry to the two banks to steal documents related to the VBS saga. This idea might have sprung to mind because of the relationship between the two banks. The curator of VBS Mutual Bank appointed Nedbank in July 2019 to facilitate the pay-out of funds to VBS Mutual Bank clients.

On Wednesday morning, the spokesperson for the Directorate for Priority Crime Investigation (DPCI), or Hawks, Capt Matimba Maluleke, provided some clarity and confirmed that a burglary had indeed taken place at Nedbank. “The suspects had made an opening in the roof at Nedbank and gained entry into the premises,” he said. He revealed that over R2 million had been stolen from a safe.

Capt Maluleke reiterated that, as far as the DPCI's investigations were concerned, the case had no connection with the VBS Mutual Bank.

One of the bank’s customers, 21-year-old Norman Mukhavhuki, complained that he had to drive back home to Manavhela village on Monday without being able to conduct his business at the bank. Mukhavhuki wanted to open a savings account at the bank but was turned away. “I had just burnt my fuel for nothing,” he said. “I just got a job and the requirement is that I have a bank account, so that the employer can pay my salary into it. So, my uncle lent me his car, but then I couldn’t open the account.”

Tshifhiwa Given Mukwevho was born in 1984 in Madombidzha village, not far from Louis Trichardt in the Limpopo Province. After submitting articles for roughly a year for Limpopo Mirror's youth supplement, Makoya, he started writing for the main newspaper. He is a prolific writer who published his first book, titled A Traumatic Revenge in 2011. It focusses on life on the street and how to survive amidst poverty. His second book titled The Violent Gestures of Life was published in 2014.