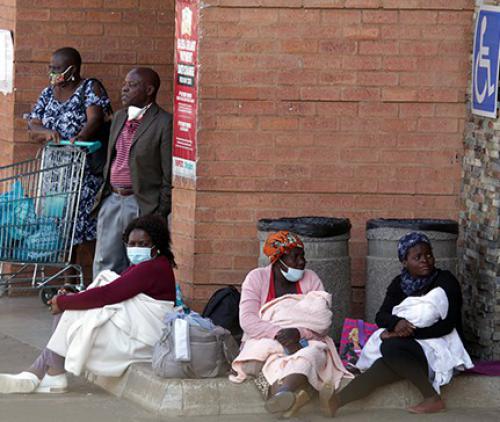 Although the jury might still be out for many on the issue of whether the wearing of a face mask is good or bad for you, all South Africans are compelled to wear a face mask when in public. The degree of masking, however, seems to be a problem, with some merely hanging the masks around their necks, while others only cover their mouths and not their noses. Some plainly just do not wear a mask or do not have a mask.

No, you may not be arrested for not wearing a mask

If somebody were to tell you in January that, by May this year, everybody in South Africa would be wearing a facemask, you would have probably said that person was crazy. Yet, few could predict the absolute chaos that the Covid-19 pandemic would release on the world, and South Africa was not spared.

Since a State of Disaster was declared by President Cyril Ramaphosa and the subsequent lockdown at the end of March, South Africans have been bombarded by a string of regulations said to help curb the spread of the disease. Many of these regulations have since sparked public outcry, with people arguing that some of them border on the absurd and have no scientific basis. The media have been full of these “absurdities” the past week or so.

Most of these regulations are also vaguely written, leading to tremendous confusion among members of the public. With citizens struggling to keep up with the ever-growing number of regulations being gazetted, the police and South African National Defence Force were called in to “police” the public’s adherence to the lockdown regulations. This has led to numerous confrontations between the public and the police, with especially businesses bearing the brunt of police action.

Regarding this, Louis Trichardt was not spared. The past month saw police closing businesses for a string of “contraventions” of lockdown regulations, such as not having “enough” sanitiser at pay points, not having the “right” sanitiser available, “failure” to enforce social distancing inside stores and having too many people inside the store. This led to the arrest of two managers of the Louis Trichardt SuperSpar on 28 April on a charge of “contravening disaster management act” with the store being forced to close the whole day for business. The two managers were arrested around 10:00 and only released after 17:00 that day. At that stage, the police’s action of closing the store and arresting the managers was questioned with a media enquiry to the police’s national spokesperson. All Covid-19 media enquiries are handled by the national office. To date, the Zoutpansberger is yet to receive a response.

The biggest reason for confrontation between the public and the police seems to be ascribed to the fact that the interpretation of the lockdown regulations is left up to the “arresting” officer. Most recently, rumours started surfacing that the police can now arrest people for not wearing a face mask in accordance with the lockdown regulations published in the Government Gazette No 43258 of 29 April this year.

According to these regulations, a person must wear a cloth face mask or a home-made item that covers the nose and mouth when in a public place, or another appropriate item to cover the nose and mouth. No person will be allowed to use any form of public transport or enter a building, place, or premises if they do not wear a mask. All employers must also provide each of their employees who may come into direct contact with members of the public with a face mask.

Almost immediately, the newspaper started receiving reports of citizens’ being threatened with arrest for failure to wear a mask. The situation was exacerbated by “fake news” reports on social media that the “not wearing of a face mask” had been criminalised.

Fortunately, sanity prevailed with the provincial office of the police’s issuing of a communiqué to all departments on 8 May that arresting a person for not wearing a face mask was illegal. “It has come to the attention of this office that members of the public are arrested for not wearing a cloth or other mask. It has further come to the attention that drivers of public transport vehicles are arrested for allowing passengers more than 70% of the maximum loading capacity of the vehicle,” the statement commences. It goes on to say that failure to comply with certain Covid-19 regulations is not an offence.

“There are a number of regulations of which the contravention thereof are not criminal offences, they only render obligations to persons and entities,” states the communiqué. It then proceeds to list some examples of contraventions that are not criminal offences. These include the failure to wear a mask. “Although the regulations specifically provide that every person must wear a mask, failure to do so is not an offence and no person may be arrested for the contravention thereof,” reads the statement.

Other examples of contraventions not deemed criminal offences that a person cannot be arrested for include the failure by a person in control of a retail store to enforce social distancing of at least one-and-a-half metres. You can also not be arrested for not providing hand sanitizer at the business’s entrance, although all businesses are urged to do so to ensure everybody’s safety. Businesses can also determine, according to their floor space, the number of people allowed on the premises. If their floor space allows for more than 100 people, they cannot be arrested for that.

Regarding the last statement, the communiqué also warns police officers of the consequences of arrest for failure to comply with regulations that are not offences. “When a person is arrested for failure to comply with a regulation of the Covid-19 regulations or a directive issued in terms of the regulations, which is not an offence, the arrest will be unlawful. When an arrest is unlawful, it is a cause for a civil claim against the SA Police Service,” the statements reads. Police officers are warned that arresting people for contraventions of regulations that are not criminal offences will be regarded in a very serious light. “In case of a civil claim against the SA Police Service, members may be held liable for any loss incurred by the state,” the communiqué reads.

Although the jury might still be out for many on the issue of whether the wearing of a face mask is good or bad for you, all South Africans are compelled to wear a face mask when in public. The degree of masking, however, seems to be a problem, with some merely hanging the masks around their necks, while others only cover their mouths and not their noses. Some simply do not wear a mask or do not have a mask.