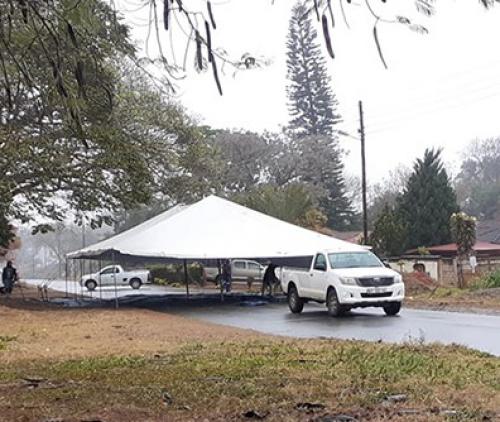 The erection of this tent over the busy Vorster Street in Louis Trichardt once again sparked a furore from frequent road users and residents in the area. Photo supplied.

Take it down, says municipality

A tent erected across a street in a busy residential area of Louis Trichardt has once again sparked outrage.

Tents being pitched across streets in Louis Trichardt have become somewhat of a common occurrence, despite being prohibited by law. This was the case again the past week when a tent, completely blocking the roadway, was pitched across Vorster Street between Munnik and Anderson Street. This sparked a furore from frequent users of the road, who argued that the action showed a total disregard for the rights of others and a failure by the perpetrators to grasp the basic concept that doing so is illegal.

Since Monday, the newspaper has been inundated with calls from angry residents complaining about the tent. Also on Monday, photos were being circulated on social media, showing traffic officials attending to the scene, but seemingly to no avail; by Tuesday morning, the tent was still up.

One extremely irate resident, who asked to remain anonymous, indicated that he had tried in vain to have the tent removed since it was erected. “When I phoned the police, they said it was a traffic problem, and vice versa. I had a good mind to drive my truck through the tent and sue the perpetrators for damages caused by the illegal structure on the roadway,” he said.

Fortunately, however, the above irate resident did not need to resort to such extremes. The newspaper had in the meantime informed the Makhado Municipality of residents’ complaints and asked them whether or not they intended to remove the illegal structure. Sure enough, just after 11:00 on Tuesday, the newspaper received a photo from municipal spokesperson Mr Louis Bobodi, showing a group of men taking down the tent. Asked whether the perpetrators had been warned or received a fine for illegally erecting the tent over the street, Bobodi said no. He explained that they had rather opted to remind the people that erecting a tent across the street was illegal and advised them to take it down. This “advice” came through the Department of Community Services. “If they resisted, then we would have warned and fined them,” said Bobodi.

The issue of erecting a tent across a street in a town’s suburb has, at times proved, very controversial. Almost to the day, exactly three years ago, the Zoutpansberger published a photo of a family who had pitched a tent for a funeral across Rietbok Street. Despite the illegality of the action, some residents accused the newspaper of being insensitive towards the grieving family, while others desperately tried to turn the controversy into a race issue, which it was not. The issue was one of right and wrong.

Regarding the most recent incident, the newspaper asked Bobodi if the municipality would be able to issue a statement explaining to people that erecting tents and other structures across streets was illegal? To this, Bobodi merely responded: “They are aware.”

In the absence of an official statement, the newspaper therefore reverted to the article about the controversial tent in Rietbok Street in September 2017. At that stage, Bobodi had supplied the newspaper with a summary of the procedure to follow when applying for road closures as per the municipal by-laws. What must be stated categorically, however, is that, in accordance with the municipal by-laws, no tent or any physical structure may be erected across a street, with the exception of a barrier tape and/or appropriate road traffic sign to warn other road users.

Residents may, however, apply to the Department of Community Services for a temporary road closure for a particular period of time for the purpose of parking cars. Acknowledgement of receipt of the application will be given within three working days, after which permission will be granted in principle and in accordance with the council-delegated powers of the municipal manager for the closing of the particular street, subject to the following conditions:

* The applicant must consult with the neighbouring houses (within a radius of 500m) and obtain permission in the form of signatures and/or stamps;

* The applicant’s event arrangement shall take place only along a particular street, and shall not disturb the free flow of both vehicular and pedestrian traffic on the street and the sidewalk;

* The applicants must ensure that there is no littering around the place during and after the event;

* The applicant uses their loudhailer or music to the possible lowest volume to avoid noise pollution (<85db) in terms of the council’s by-laws and/or the disturbance of public peace;

* The applicant does not cause havoc or a fracas or take part in any havoc or fracas or argument whilst the funeral arrangement is progressing;

* The applicant exonerates the municipality from any lawsuit that might arise or emanate from the event arrangements for a particular period of days and time;

* Should the municipality receive any complaint in violation of any of these conditions and/or any legislation or by-law relevant to this from any households within a radius of at least 500 meters from the actual location of the event or any other person with material facts, the municipality can retract or revoke the permission given;

* The applicant must publicise the closing of the said street in the local media, both electronic and print, as well as on the official notice boards around the municipal area; and

* No claim whatsoever shall be laid against the council arising from your promotion in any manner.

The Makhado Municipality acted on complaints from the community and, through the Department of Community Services, “advised” the perpetrators to remove the tent. This pictured of the tent's being taken down was taken on Tuesday morning. Photo supplied.