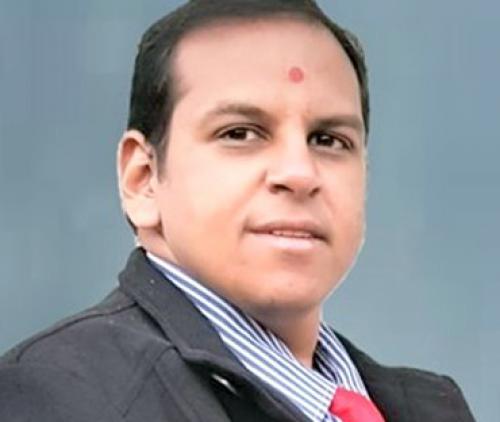 Divyesh Joshi, who has been nominated as a finalist in the South African Institute of Chartered Accountants’ (SAICA) prestigious 2020 Top-35-under-35 competition. Photo supplied.

Divyesh Joshi continues to make his hometown of Louis Trichardt proud after being selected as a finalist in the South African Institute of Chartered Accountants’ (SAICA) 2020 Top-35-under-35 competition.

SAICA started the competition in 2014 to recognise young, chartered accountant achievers who are not only excelling in their professional capacity, but who are also making a meaningful contribution to society.

This year, Divyesh was nominated as one of those select few individuals. His rise in the corporate world is quite spectacular and, at present, this 35-year-old holds the position of acting chief financial officer for MTN South Africa.

Although Divyesh made his home in Pretoria, he still has strong roots in Louis Trichardt, with mom Ansuya still living in Eltivillas. Many will also remember his dad, Jagadishandra Joshi (fondly known as Joshi), one of the best-known faces at Solly’s Discount World in town. Sadly, he died in October 2011.

As a young man, Divyesh attended both Eltivillas Primary and Soutpansberg Primary. After matric, he started studying chartered accounting at the University of Pretoria in 2003. He finished his honours degree in chartered accounting in 2006 at the age of 21. A year later, he started working at PricewaterhouseCoopers (PwC), and at age 27, Divyesh was among the youngest to be put into the partnership process at PwC. He decided to get some commercial experience, however, and joined MTN. A year later, at 28, he was the youngest general manager at MTN South Africa and the first recipient of MTN SA CEO’s Award for Aspirational Leadership. At the time, he managed a team of some 15 functional areas and 500 staff members, and he credits the diverse skills one learns as a CA (SA) as being a major contributor to his success.

For Divyesh, being counted among the top 35 finalists is an enormous honour. “If you look at the profiles of the other finalists, there are some amazing people there,” said Divyesh in an interview with the newspaper. “As one of the Top-35-under-35 people in the competition, you are automatically a finalist.  From these, they will announce four category winners and then one overall winner. This will be announced at the end of November this year,” added Divyesh.

To this day, Divyesh remains humble about his achievements and attributes his success to his first role models in life, his mother, father, and grandmother. “They have sacrificed absolutely everything to make sure that I get a great education. They left me with three indelible lessons in life, which I carry with me even until today. First, they taught me that I must believe in and work towards a goal and a cause which is much bigger than myself. Secondly, they taught me that there is no substitute for kindness, integrity, and hard work. Thirdly, and most importantly, they taught me that there is no limit to what the human mind can achieve,” said Divyesh.