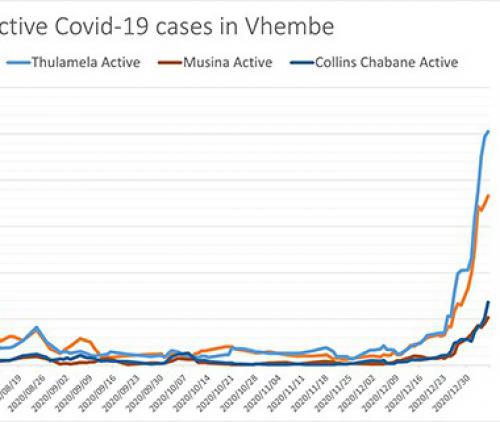 A graph reflecting the number of active Covid-19 cases in Vhembe.

Covid-19 strikes back with a vengeance in Vhembe

An upsurge in Covid-19 cases caused panic in the Vhembe District over the past two weeks and, for the first time since the pandemic started, the number of active cases soared past the 1 000 mark. On Tuesday (5th) the official figures released by the province’s Department of Health indicated that 1 110 people in Vhembe are active carriers of the virus and 92 patients had died after being infected.

The real figures, however, are believed to be significantly higher as updating the statistics takes some time. Earlier this week, most of the hospitals in Vhembe treating Covid-19 patients were swamped, with almost no beds available.

The steep rise in Covid-19 cases surprised many local residents. When the festive season started around 14 December last year, the Vhembe District was a fairly “safe” haven, with only 118 active cases. At that stage, 2 546 Covid-19 cases had been recorded, with 75 deaths.

The sudden second wave of infections caught many residents completely off guard. The relaxed attitude by many residents and failure to adhere to Covid-19 prescriptions did not help either. A new strain of the virus, however, proved to be more aggressive and seemingly targeted younger people as well.

When the end of 2020 arrived, the number of active carriers had already increased to 722, with 88 fatalities.

In the Vhembe District the fastest spreading rate was recorded in the Thulamela municipal area. On 21 December, Thulamela and Makhado were still “on par”, each with active infections just below 70. A week later, Thulamela passed the 200 mark and another week later, on 4 January, the municipal district was closing in on the 500 mark. On 5 January, Thulamela had officially recorded 1 776 infections, with 44 deaths.

The Collins Chabane municipal area had recorded 557 infections, with 136 active cases and 11 deaths on 5 January. On the same day, Musina had 424 Covid-19 cases, of which 103 were active. Only four Covid-19-related deaths were recorded.

With the influx of people from other provinces over the festive season, the number of Covid-19 infections in Limpopo skyrocketed. On Tuesday, the Limpopo Department of Health warned residents to be very vigilant. “Let us continue to comply with all the Covid-19 regulations. Wear masks, sanitise your hands regularly, observe social distancing, avoid crowded areas and stay at home when possible,” the department advised.

Health MEC Dr Phophi Ramathuba, together with the Head of the Department, Dr Mhlongo, held a meeting on Tuesday at the Polokwane Hospital with the executive management to discuss the Covid-19 resurgence. “We are currently in the middle of the second wave of Covid-19, albeit with a new variant, which scientists have warned is more easily transmitted, and the infection and death rates are very high (already higher than the first wave) and still rising,” said the department.

According to Wednesday’s statistics, Limpopo had already recorded 29 265 Covid-19 cases, with 625 deaths. The latest figures indicate 6 318 active cases in the province. Although Limpopo still has the lowest number of Covid-19 tests per 100 000 residents, this number increased drastically the past week. More than 119 000 people had already been tested by Wednesday.

The basic reproduction number assumes a “perfect environment” for the virus, where no other individuals are infected or immunised. This is a theoretical scenario but gives an indication of how dangerous a virus can be.

The more important number is considered to be the effective reproduction rate. This number takes into consideration all factors, such as the environment, behaviour patterns, and general immunity.

According to a data analysis website, www.reproduction.live, the effective R-number for Limpopo on Monday (4th) was 1,71. The estimate is based on the new cases that were reported and does not factor in under-reporting.

The problem areas in Limpopo were Waterberg (R-number of 2,19) and Mopani (R-number of 1,92). The Vhembe District had an effective R-number of 1,62. The figures, however, indicate that this value was based on cases reported only up to the end of 2020.

Limpopo is currently the province with the highest R-number (1,71). Provinces such as the Eastern Cape, where strict Covid-19 control mechanisms had been put in place, have shown a dramatic drop in the R-number value. In the Eastern Cape, the latest available value shows that the effective reproduction rate has gone down to 0,8.

A graph showing the Covid-19-related deaths in Vhembe.