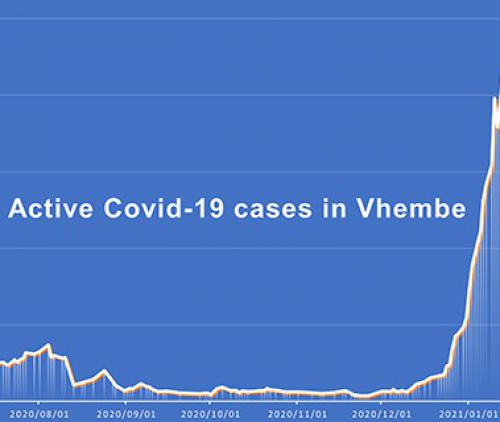 The number of active Covid-19 cases dropped dramatically during the past few weeks.

Covid-19 infection rate may be much higher than reported

Even though the official figures for Covid-19 infections have dropped significantly the past few weeks, the death toll in the Vhembe region is worrying. On Tuesday (16 February) the number of Covid-19 deaths reported in Vhembe stood at 328, but when various other data is taken into account, the picture looks much bleaker. Many more people are believed to have been infected by the virus and to have died than what the official figures state.

The second wave has passed

Statistics supplied by the Limpopo Department of Health indicate that on Tuesday, 16 February, the number of infected persons (active) in Limpopo had dropped to 925, with the cumulative infections standing at 60 378. The province has recorded 1 662 Covid-19 deaths.

In Vhembe, the situation has also changed dramatically in the past month. On 13 January this year, the official figure for active infections stood at 2 147. Most of these were in the Thulamela district (842), with Makhado not far behind on 770. At that stage, the official Covid-19 death toll was 105.

On Tuesday (16 February) the figures supplied by the Department of Health showed that there were only 154 active Covid-19 cases in Vhembe. The cumulative infections have gone up to 11 401. Thulamela has the highest number of active cases (65), with Makhado second (64), Collins Chabane third (20) and Musina in the last place (5).

The worrying part is the steep increase in fatalities. In a month’s time, the death toll has gone up to 328 in Vhembe. Most deaths occurred in Makhado (160), with 108 deaths in Thulamela.

Why the sudden spike?

On 19 January, the Limpopo Health Department released a statement in which it tries to explain the sudden rise in the death toll. The department ascribed it to administrative processes.

“The province has captured an additional 238 deaths, following the final capturing by the National Institute of Communicable Diseases (NICD). These are the figures that could not be immediately reported on the official statistics due to delays in capturing. These figures go as far back as August 2020. Of this number, 160 are from private facilities, while 78 come from public facilities,” the department said.

Even though this explains part of the discrepancies in figures pointed out by health experts, it does not address the full extent of the problem.

One cause for concern is the excess deaths reported throughout the country. These are deaths that exceed the average prediction, and the Limpopo Province seems to be culprit number one.

Every year, more than 500 000 people die in South Africa. The deaths must be reported, and these figures are recorded on the National Population Register. Institutions such as the SA Medical Research Council (SAMRC) use the figures to do predictions, which again assist with planning.

The predictions done work much the same as the budget of a business. The business can look back at previous years and estimate what the income and expenditure should be. The business can also adapt the figures to make provision for special circumstances (that is, during a strict lockdown, the turnover may be affected, and income will drop.) When the turnover turns out to be dramatically higher or lower than the budget (prediction), questions need to be asked as to the reasons for the deviation.

The SAMRC uses a method that accounts for various factors, even including making provision for people not registered on the country’s population register. Based on historical data, the prediction was that in the period between 29 December 2019 and 30 January 2021, a total of 569 998 deaths (people 1 year and older) would be registered. The figure includes 550 949 “natural deaths” and 49 337 “unnatural deaths”. (An unnatural death is when an external cause, such as an accident or homicide, causes the death.)

The surprising part is that, in South Africa, many more people died last year than what the figures predicted as being “normal”. The unexpected or additional deaths are referred to as “excess deaths” In the period between 3 May 2020 and 30 January 2021, the number of excess deaths in SA stood at 132 481. On 30 January this year, the official Covid-19 death toll stood at 43 951.

Based on an analysis of the available figures, the Covid-19 statistics for Limpopo are not very reliable. The SAMRC’s prediction for natural deaths of people 1 year and older in the province (between 29 December 2019 and 30 January 2021) is 68 500.

Taking into account the actual deaths that were recorded, 11 469 people more than the estimate died. Even if one factors in the Covid-19 death toll for the province (1 269 on 31 Jan), that still leaves more than 10 000 deaths unaccounted for.

This figure is especially worrying if one tries to create some perspective. It means that the residents of an average-sized town simply disappeared in fewer than 12 months.

Although the discrepancies between actual deaths and expected deaths occur in all provinces, they are especially high in Limpopo and Mpumalanga, which may indicate a significant under-reporting of Covid-19 cases in these two provinces.

In a recent article on excess deaths published in GroundUp, Alex van den Heever of the Wits School of Governance provides some clarity.

One of the main problems seems to stem from the way Covid-19 deaths are being recorded. Covid-19 statistics are gathered by the NICD. The data, however, is not sourced from death certificates, but from an ad hoc reporting system established by public and private health-care facilities. The intention of the ad hoc reporting is to offer immediate surveillance of Covid-19 mortality patterns.

Van den Heever points out that data accuracy for this system is not consistent and often varies from hospital to hospital. Data is also difficult to verify with an ad hoc system.

A further problem is that no apparent tracking of out-of-hospital Covid-19 deaths takes place. People who die without undergoing a PCR test may not be included in the count. “It is therefore probable that the official reports do not reflect actual Covid-19 mortality,” the GroundUp report reads.

The conclusion reached in the article is that excess deaths are most directly attributable to Covid-19 infections rather than collateral deaths. “As a result, South Africa’s Covid-19 mortality to the week for 17 January 2021 is most probably in the range 111 227 to 133 128 rather than 34 828. This is roughly a three- to four-fold difference from the official data,” the article reads.

The really worrying part is that mortality is the result of a serious problem. In South Africa, the mortality rate among Covid-19 patients is around 3%. Should one attribute the excess deaths to Covid-19 infections, this means that the real figure for Covid-19 infections in Limpopo could be well over 350 000.

Last Friday (12th) the results of a study done on blood donors was published. The study, led by authors from the South African National Blood Service, showed a much larger prevalence of Covid-19 infections among the population than was previously estimated. The tests were conducted in four provinces, namely the Eastern Cape, Northern Cape, Free State and Kwazulu-Natal.

In the period between 7 and 25 January, blood samples from 4 858 donors were tested for antibodies to the virus that causes Covid-19. The presence of such antibodies indicates that a person has been exposed to the virus.

Based on the percentage of infections found in the blood samples, the researchers extrapolated their results to the whole population. In the Eastern Cape, the researchers estimated that 63% of the people have been infected since the epidemic started. In Kwazulu-Natal, the estimate is that 52% of people have been infected, in the Northern Cape 32% and in the Free State 46%.

The study did not include blood donors from Limpopo, but a good chance exists that this province’s trend would be in line with that of the Eastern Cape. These figures are worlds apart from the official infection figure, which, in the case of Limpopo, is below 1,1%.

The authors acknowledge that blood donors are not representative of the South African population but write: “It seems plausible that these estimates are reasonably generalisable to actual population level anti-SARS-CoV-2 seroprevalence but should be further verified.” The study has not yet been peer reviewed.