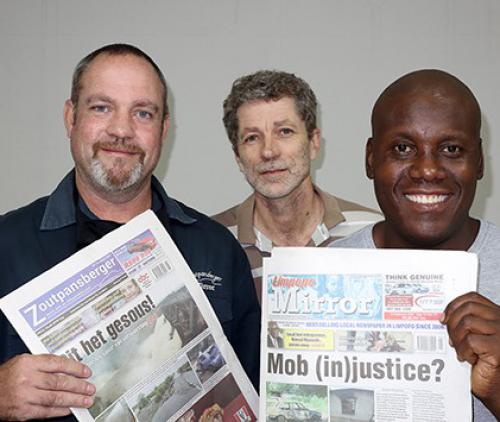 Andries van Zyl (left) won the Human Interest category during the annual FCJ awards. He also ended in the top 10 in the Hard News and Sports Writing categories. Tshifhiwa Mukwevho (right) was a top-10 finalist in the Hard News category. Anton van Zyl (centre) won the Investigative Reporting category for the third year in a row.

The Vhembe region’s two independent newspapers, the Zoutpansberger and Limpopo Mirror, excelled once again at the annual Forum for Community Journalists (FCJ) awards, scooping up some of the top positions in various categories.

The Zoutpansberger won the coveted Newspaper of the Year award in the category for independent commercial newspapers. The Village News, based in Overstrand in the Western Cape, came second, with the Limpopo Mirror in the third position.

The Zoutpansberger also won the Best Front Page award in the category for small independent newspapers. The Globe Post from Lenasia was second with The Village News in third place.

In the writing categories, the journalists from the northern part of the country showed their mettle. Andries van Zyl, editor of the Zoutpansberger, won the very competitive Human Interest category. This is considered to be one of the most difficult categories to win and traditionally attracts the most entries. Second place went to Desirée Rourke from the Western Cape-based TygerBurger, with Daleen Naudé from the Middelburg Observer in third place.

The Hard News writing category is another of the fiercely contested categories during every year’s competition. Two of Vhembe’s journalists made it to the top 10 finalists, namely Tshifhiwa Mukwevho, who writes for Limpopo Mirror, and Andries van Zyl from the Zoutpansberger. The category was won by Elaine Davie from The Village News, with Desirée Rourke from TygerBurger in second place and Andisa Bonani from The Representative in the Eastern Cape in third place.

Anton van Zyl, executive editor of both the Limpopo Mirror and Zoutpansberger, won the prestigious Investigative Reporting category once again for a series of exposés that he wrote for the Limpopo Mirror on the shenanigans at the National Lotteries Commission. This was the third year in a row for Anton to win this category. Dustin Wetdewich from Potchefstroom Herald was second, and Daleen Naudé from Middelburg Observer third.

In the sports-writing category, Andries van Zyl from the Zoutpansberger was a top-10 finalist. This category was won by Racine Edwardes from Peoples Post (Cape Town), with Hugo Redelinghuys from George Herald second and Jarryd Westerdale from the Roodepoort Record third.

This year’s competition was presented as a virtual ceremony. Although the organisers did not say how many entries had been received, they mentioned that a record number of journalists and photographers had entered the competition. This is the only competition of its kind in the country where corporate-owned and independent newspapers compete against each other. Annually, it lures the very best of community journalism and is a showcase of the talent in the country.