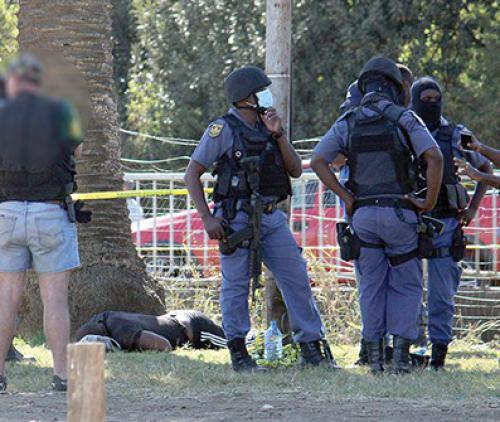 The scene of the fatal shooting were a man, allegedly a highly sought-after suspect, was shot dead on 30 May in Louis Trichardt. IPID is now taking a close look at the circumstances surrounding the shooting. Photo: Kaizer Nengovhela.

Many questions still remain for the relatives of the man shot dead by the police in Louis Trichardt on Sunday, 30 May. The Independent Police Investigative Directorate (IPID) now hopes to answer some of these questions after launching an investigation into the fatal shooting.

The deceased, alleged to be a highly sought-after suspect, was shot dead and three of his travel companions were arrested, following a shootout between them and the Makhado Police at the corner of Rissik and Klein Street near Bridge Auto at around 11:00 on that fateful day. The shootout ensued when the police confronted the men.

Media enquiries about the incident sent to the police’s provincial communications department were initially ignored. The only response the newspaper received came in the form of a WhatsApp reply from provincial police spokesperson Brig Motlafela Mojapelo three days later. He merely stated: “The case has been handed over to the IPID.” To date, and in the absence of any official statement regarding the fatal shooting, the decease’s identity remains unknown.

The newspaper then escalated its enquiry to the national office of the IPID. The office’s spokesperson, Ms Ndileka Cola, responded on 3 June by confirming that IPID has launched an investigation into the shooting.

Follow-up questions about the progress of the investigation were again sent to IPID the past week. Cola responded on Tuesday by stating that their investigation into the incident was at an advanced stage. “A post-mortem has already been conducted and the firearms of suspected police officers have been confiscated and sent to ballistics for analysis. One of the key witnesses was traced whilst the other two witnesses, who are non-nationals, are still being traced,” Cola said.