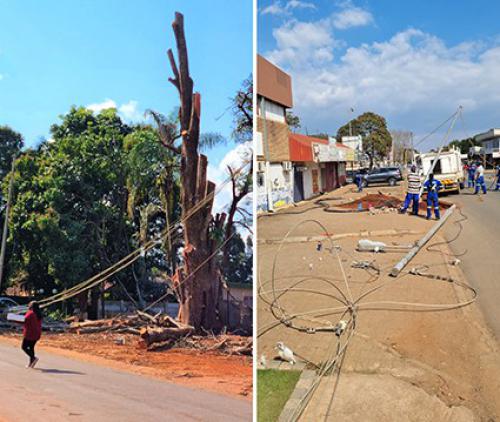 A scene of total chaos prevailed in President Street on Saturday morning after a tree-felling attempt went horribly wrong. Parts of the tree crashed onto overhead power lines, causing the power lines to drop to the ground and the poles holding the cables in the air to buckle. Photos supplied.

Some residents of Louis Trichardt were left without electricity for almost two days after a tree-felling attempt went horribly wrong on Friday afternoon.

In the process of felling a large tree located at a private residence in President Street between Songozwi and Devenish Street, parts of the massive tree crashed onto overhead power lines, causing the power lines to drop to the ground and the poles holding the cables in the air to buckle. The scene was one of chaos.

“This is what happens when one employs people from the street to do specialist work such as tree felling,” remarked one passer-by. (The newspaper was unable to determine who the “contractor” was).

The damage left residents in the immediate area reliant on alternative power sources such as generators until Sunday evening. This caused irate residents to ask whether the Makhado Municipality planned to claim damages from the individuals responsible for the destruction.

Makhado municipal spokesperson Mr Louis Bobodi confirmed on Tuesday that the damage had been caused by private individuals and that the municipality intended to recoup the cost of repairing the damaged infrastructure from them. At that stage they were, however, still calculating the cost of the repairs. “We had to replace, amongst other items, six streetlights, cables, conductors and street poles. Indeed, the municipality can and will institute a claim for such wanton damages from the offending private individuals,” said Bobodi.

Some of the residents in the area claim that the electricity supply to their households was only restored at around 20:00 on Sunday evening. According to Bobodi, the power was restored within 36 hours after the damage was sustained.