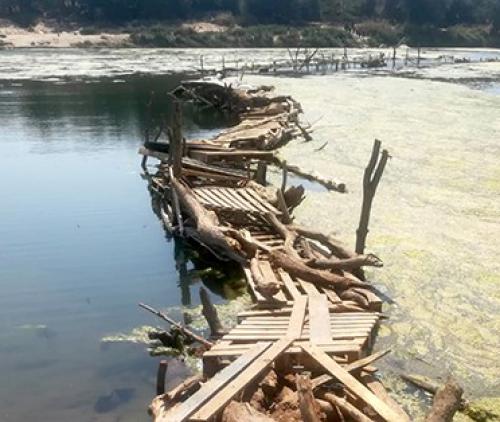 The makeshift bridge that had been built by illegal immigrants across the Limpopo River, west of the normal bridge. (Picture before destroyed). Photo supplied.

The South African National Defence Force (SANDF) had to be called in after the police in Musina found themselves confronted by crocodiles during an attempt to demolish a wooden bridge that had been built illegally across the Limpopo River by smugglers.

The makeshift bridge, built some three kilometres west of the main border (Beitbridge border), had been used by illegal immigrants from Zimbabwe to cross into South Africa to purchase groceries, electrical appliances, fuel and other basic commodities needed in Zimbabwe.

After a meeting by Zimbabwean and South African security agencies two weeks ago, a decision was taken to just destroy the bridge. However, SAPS members were rudely interrupted and prevented from performing this task by a number of snapping crocodiles that started to charge at them. According to Limpopo police spokesperson Brigadier Motlafela Mojapelo, shots had to be fired at the feisty reptiles to scare them off.

The police requested the assistance of the army, and the makeshift bridge was demolished on Monday (13 September).

Mojapelo said no arrests had yet been made regarding border jumpers who made use of the bridge.

When Limpopo Mirror visited Beitbridge border last month the (mostly Zimbabwean) youths, who call themselves ‘Zalawis’, hung around the border post, offering to help carry any undocumented fares over to Zimbabwe - via the makeshift bridge - at a fee.

“This is the only way I can make a living,” one of the Zalawis told the correspondent. “A single trip ranges from R200, depending on the weight of the goods,” he said. On good days, he made up to three trips back and forth between Zimbabwe and South Africa, using the makeshift bridge.