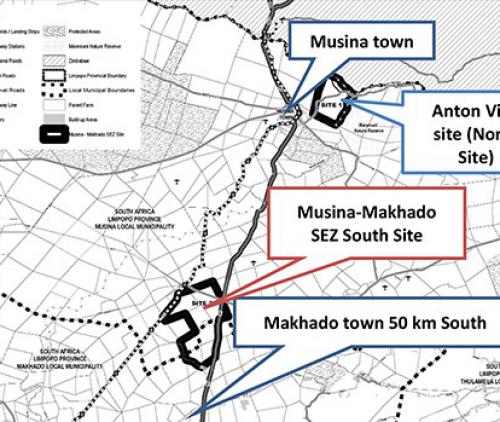 Interested and affected parties (IAP) have been granted an additional round of public-participation meetings to voice their objection or support for the government’s highly contentious Musina-Makhado Special Economic Zone (MMSEZ) just north of the Soutpansberg.

EnviroXcellence Services, the newly appointed environmental assessment practitioner (EAP), invited IAPs this week to attend a number of public-participation meetings to discuss the final environmental impact assessment (EIA). They are seeking to get authorisation for the clearing of limited vegetation for the construction and installation of bulk services infrastructure and fencing for the MMSEZ south site. (The MMSEZ will include two components and sites situated in close proximity but at two different locations. The north site is to be located between Musina and Beitbridge, while the south site will be located approximately 50km to the south of Musina in the Mopane area. This site will focus on the metallurgical and energy cluster of heavy industrial activities for the proposed MMSEZ).

EnviroXcellence took over as EAP from Delta BEC, who was originally appointed to conduct the EIA. Delta BEC concluded the EIA process up to submission of the final EIA to the Limpopo Department of Economic Development and Tourism (LEDET), after which they withdrew from the process. EnviroXcellence has since concluded the final EIA after LEDET identified some information gaps in the initial report and requested additional studies, more public participation and a revised EIA.

Among the specialists reports included in the new, revised EIA are an updated biodiversity-offset report and a climate-change report.  In addition, LEDET also requested that clarity be provided on, amongst others, water security and energy supply for the proposed MMSEZ, with the focus on the long-term life of the development.

New plan, half the footprint

Due to the dramatic impact the proposed MMSEZ will have on the region’s biodiversity, LEDET requested that the biodiversity offset specialist report be updated. The new EIA now proposes halving the initial overall footprint of the clearing area from 8013,91ha to only 3862ha, committing more than 51% of the original site for conservation and ecological linkages. This, the revised report states, will ensure that critical habitats within the MMSEZ South site, as pointed out by the fauna & flora-, wetland- and avifauna specialists, are conserved.

It is going to get hot!

From the onset, the proposed MMSEZ has been severely criticised for relying on a coal-fired power station to supply in its electricity needs. This in an era where many countries are trying to reduce their carbon footprint drastically to try and curb global warming. The revised EIA states that although the current EIA may not have a significant impact on climate change, because of limited vegetation clearance and construction for the bulk services and fence, looking at the possible longer-term future industrial impacts of the project is pertinent as the majority of the MMSEZ South site emissions will occur during the industrial operational phase, with an anticipated high impact.

Among the key future aspects highlighted in the revised report are, among others, heat and water stress. The report states that climate-change models predict that average temperatures are to increase in the Limpopo Province by as much as 2°C by 2035. This culmination of increased average temperatures and heat stress, states the report, can result in a greater number of people at risk of heat-related medical conditions. As for water stress, the report states that the MMSEZ’s South site is located within a water-stressed area that is currently experiencing problems regarding water scarcity and water quality. Climate change will exacerbate water problems in this area, particularly with predicted increases in drought, rainfall, and wind variability.

Although little energy will be required for the current EIA (the vegetation clearance, bulk services and fencing), a sustainable supply of energy will be pertinent for the future industrial development of the site. The report states that Eskom has indicated that it will be able to supply 5 MW of the electricity required during the first year of industrial operation of the MMSEZ South site. For this reason, various other technologies and options were also considered during this EIA for power supply to the subsequent industrial development of the MMSEZ South site. These options include advanced nuclear, solar power, biomass (natural gas) and clean-coal technology.

Advanced nuclear power generation was not regarded as feasible because of the timeline for the development and regulatory and licencing issues of an advanced nuclear power plant. As for solar, this was also not viewed as viable as approximately 2000ha of solar panels would be needed to generate the necessary power. With regard to biomass and access to natural gas, the challenge is that no natural gas reserves, new explorations, pipelines or LNG import facilities in the MMSEZ South site or surrounding areas are currently available. The report concludes that the best available source of energy remains a combination of renewable energy (for future administration buildings) and a scaled-down, independent coal-fired power plant (for future industries for 24/7 power supply) that will enable power-generating capacity outside the state-owned power utility, Eskom.

Currently, three main water-supply projects/options are planned for the area. This includes the planned Mutasshi/Musina Corridor Bulk Water Supply, whereby at least 30 million cubic meters of water is planned to be transferred from the Zhovhe Dam, located in Zimbabwe, to South Africa; the development of the Musina Dam (which we reported on last month); and access to groundwater. The report states that access to a dedicated water supply will definitely need to be secured to allow for further development of the metallurgical hub of the MMSEZ South site.

Where to go to have your say

The above are just some of the topics highlighted in the final revised vegetation-clearance, bulk-services and fencing EIA for the south site. The complete report can be viewed by visiting http://www.enviroxcellence.co.za/. The additional round of public-participation meeting is scheduled from 27 September to 2 October (for venues and times, see advertisement on p.4).

Revised EIA does not SOLVE anything

Those opposed to the proposed MMSEZ have already voiced their objections against the revised EIA. “Firstly, SOLVE wants to object in the strongest possible terms that the premier of Limpopo announced at an investment conference that the EIA for the MMSEZ has now been approved and the project has received the green light to proceed! This is not true at all, since the public-participation meetings are still in progress, and the process to finalise the EIA is still ongoing,” said Mr Johan Fourie, acting chairman of Save Our Limpopo Valley Environment (SOLVE). Fourie said that the premier’s announcement clearly created the impression that the project was a fait accompli and that the current public-participation process was a mere window-dressing exercise.

“Secondly, we want to express our disappointment that registered interested and affected parties had to approach the newly appointed consultants to demand our right to be included in the public-participation process, and to remind them that the process has not been completed yet and that we have the right to appeal the final EIA. It was only hereafter that another round of public-participation meetings was called,” said Fourie. He added that this once again illustrated that the appointed consultants wanted to exclude interested and affected parties (especially those opposed to the project) from the consultation process, making the whole process a farce.

SOLVE said that they welcomed the fact that an effort had been made to reduce the negative environmental footprint of the project by scaling it down. “However, we are of the opinion that it does not go far enough and that the project still does not meet the basic requirements of sustainability. As long as the project includes a coal-fired power station and coal-based industries, we and our partners will oppose the project,” said Fourie. He said that coal was an obsolete and dirty fossil fuel that polluted and was responsible for massive environmental destruction and contributed significantly to global warming and climate change. “SA and Zimbabwe are the only two countries in sub-Saharan Africa that still promote coal as a fossil fuel. The rest of the region and Africa are in the process of phasing coal out at a significant rate. If our government does not follow, the country runs the risk of becoming an outlier for investment due to our non-compliance to phase coal out in order to reach the goals of climate change,” said Fourie.

Fourie said they were still of the opinion that the water resources for this massive project were not secure and sustainable. “Relying on underground water, fictitious agreements with Zimbabwe and dams that must still be built does not guarantee a sustainable supply of water. Surely, if a sustainable source of water cannot be guaranteed at this point, the project cannot go ahead,” said Fourie.

“We are also aware that hunting permits have been issued for the culling of animals in the affected area, which once again proves that the mindset of LEDET and government is to proceed with the project at any cost and without proper public participation. Lastly, despite many objections and calls from us, no effort has been made to provide us with a comprehensive and integrated plan for the development of the area,” continued Fourie. He points out that the MMSEZ project does not stand in isolation, is directly linked to the coal-field developments of MC mining, as well as the current calls for a smart-city development in the area. “All of these projects are reliant on one another, and need the very same water and other resources to be sustained. One cannot survive without the other. Despite this, NO effort has been made to evaluate the cumulative impact of these projects on the environment, the resources of the area and existing economic activities,” said Fourie.

“This EIA process has been flawed in various ways, including non-adherence to prescribed timeframes, flawed and inadequate public-participation processes and changing the EAP without notice or transparency. We do not believe it is legal,” said Ms Makoma Lekalakala of Earthlife Africa, another organisation that vehemently opposes the proposed MMSEZ. “In any event, the impacts even as assessed are unacceptable. 23% of South Africa's carbon budget on a 1,5-degree trajectory is a crime against humanity and will never be accepted. This is a water-intensive project in a water-scarce area. Another crime,” said Lekalakala.

“One thing I must say upfront is that there is really no such thing as clean coal, in the sense that a 100% carbon capture is horrifically expensive. It is very difficult to do. In addition to this, when the investors heard that the climate-change specialist said in the first place that the only way that this could go ahead through a climate-change perspective would be a 100% carbon capture, they said there was no way they were spending that sort of money,” said Liz Pattison, another SOLVE management member. She said that South Africa could not afford any more coal. “So, if this thing goes ahead, we cannot possibly contribute to keeping the temperature increase to no more than 1.5°C. Already, many climate-change indicators are at tipping point. The scariest is probably the Gulf Stream. Really, it [the MMSEZ] is just not environmentally criminal for that part of Limpopo and probably Limpopo as a whole, it is pretty criminal to do it to all of the citizens of the world,” said Pattison.