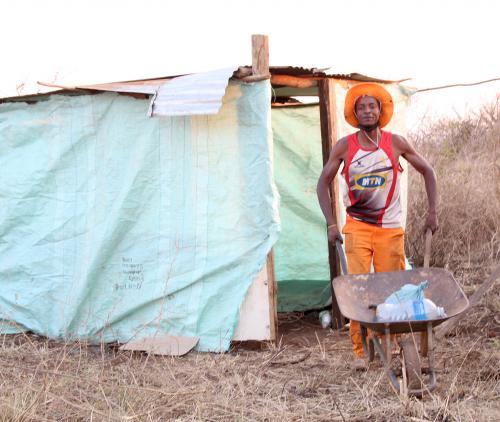 Boitumelo Machaba pushes a wheelbarrow next to his shack.

You promised us RDP houses, not an auction, say shack protesters

In spite of legal threats by the Makhado Municipality this week, a number of people are still occupying shacks that they have erected on a piece of land about to be auctioned off. The shack builders protest against the auctioning process, saying that they have been promised that RDP houses will be built on the land.

The Makhado Municipality intends to sell 849 vacant residential and business stands via an online auction. The stands are in two newly established townships, just south of Pretorius Street in Louis Trichardt and adjacent to Tshikota Extension 1. The auction is scheduled to take place between 24 September (09:00) and 27 September (09:00). The first of the viewing sessions was scheduled for last weekend, whereas another viewing session was scheduled for 18 and 19 September.

In court documents delivered to some of the protestors, the municipality states that the first viewing session had to be cancelled because of the disruptions. The municipality alleges that a group of people started “giving away” stands last week, urging the new “owners” to erect a shack as soon as possible to secure their stands.

Municipal officials were apparently afraid of confronting the shack builders. The Council also argues that it stands to lose almost R100 million in revenue if the auction does not take place. “It is submitted that there is a risk that the Applicant’s land will be lost to unlawful occupations,” it is stated.

The shack builders, however, refuse to give in without a fight. They argue that the issue dates back further than 2018, when the municipality also had to approach the high court to stop them from erecting shacks on the property. A court order was granted and was never contested.

In March 2018 officials and members of the Makhado Municipality’s executive committee visited the area and spoke to the residents. It is claimed that the then mayor promised the residents that at least 200 RDP houses will be built on the specific site to cater for the poor in Tshikota.

In the latest development the sites are to be auctioned off in two phases. Prospective buyers have to pay a R10 000 registration fee and a reserve price put on each stand must be met for a successful transaction. Council thus far has not disclosed what the reserve prices are.

The unhappiness of residents from Tshikota hoping to get a new place to stay, intensified. A group of residents, including women and children, have occupied portions of the land.

One of the shack dwellers, Ms Tendani Maluba, said that they have tried to engage the municipality several times, without any success. She said that the former mayor Cllr Shonisani Sinyosi promised to build 250 RDP houses for needy community members. “We have got kids who are not married, so their kids have to have their own shelter in the future. When you die, and then your kids don’t have a roof where they can put their head down, and then it becomes a problem. Some of the kids become street kids because they don’t have any place to sleep,” she said.

From what could be established the High Court will only decide on the matter on 28 September and no eviction order had been issued.

(Because this is a developing story – no comment is included from the municipality. The story will be updated on Monday when hopefully comment can be added from the Makhado Municipality. A more comprehensive report will also appear in next week’s edition of the Limpopo Mirror)

Joyce Maruni photographed with her daughters and grandchildren.