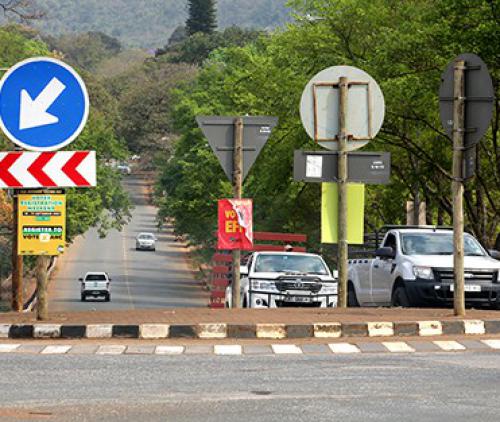 With the election posters starting to go up again over the past week or so, the Zoutpansberger started receiving complaints from residents about election posters' being placed on road traffic signs, especially on the N1.

With the 2021 municipal elections around the corner on 1 November, the war of words between politicians vying for the support of voters has erupted once again. So too did the poster war, with political parties jostling for the best spots to catch voters’ eyes.

Unfortunately, the poster war normally ends up in an information overload, with posters being erected on anything that stands upright. Whether through ignorance or arrogance, some political parties do not seem to play by the rules, especially regarding the illegal practice of placing election posters on road-traffic signs.

With the election posters starting to go up again over the past week or so, the Zoutpansberger started receiving complaints from residents about election posters' being placed on road traffic signs, especially on the N1. This is an issue that this newspaper has reported on numerous times in the past.

The placement of election posters on road traffic signs is prohibited and is regulated by the South African National Road Agency Limited and National Roads Act, Act 7 of 1998, and its regulations.

According to the National Roads Act, a “poster” is, among other things, defined as any placard announcing the candidature of any person nominated for election to parliament, local government or any similar body. Regarding this, Regulation 24 of the Act on Outdoor Advertising relating to sidewalk posters and notices states that such a poster may be displayed only in an urban area of partial or minimum control. No person may erect a sidewalk poster or notice without first obtaining the written approval of the relevant municipality, in this case the Makhado Municipality.

Most importantly, Regulations 24 states that these posters can only be displayed on an electric light standard or other structure that is provided for the express purpose of pasting or affixing the poster or notice. It may not be attached or affixed to a road traffic sign or a signal, wall, column or post of a veranda or balcony, electric box, tree or bridge. Interestingly, the regulation also states that, in the case of election or referendum campaigns, no more than three posters per light post or standard will be allowed. These election posters may also not be put up before the date of the election has been gazetted and must be removed no later than 14 days after the election. Posters may also not be displayed on the road reserve boundaries or freeways.

Judging by the stipulations of the Act, some political parties could clearly not care less about legislation. The Zoutpansberger asked SANRAL as responsible authority for the N1 and the Makhado Municipality for comment about the illegal activity.

No feedback was received from the Makhado Municipality, other than municipal spokesperson Mr Louis Bobodi’s indicating that he was trying to get information. The newspaper wanted to know from the municipality, among other things, which political parties had applied and been granted permission to put up election posters, whether these illegal poster would be removed and whether a political party could be fined for contravening the regulations of the National Roads Act.