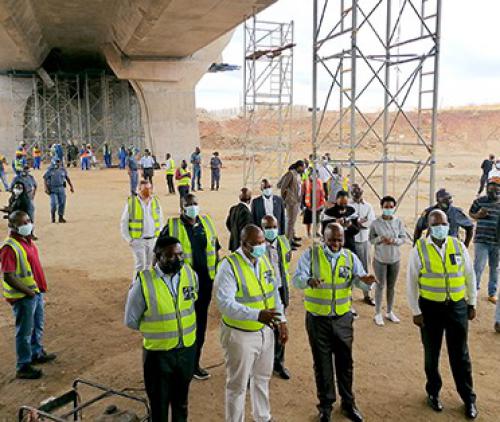 Minister in the Presidency Mondli Gungubele during a visit to check on the progress of the Musina Ring Road. This is the first bridge from the China Mall along the N1. Photo: Bernard Chiguvare.

The Covid-19 pandemic has caused economic challenges in numerous sectors across the world, with the countless job losses probably being the most worrying result thereof. Another serious problem that has ensued from it in South Africa, though, is delays in the completion of many key projects that are supposed to benefit the country. One such project is the Musina Ring Road, which is currently under construction to the west of Musina town.

The construction of this ring road started in 2016 and was expected to be completed by 2018. However, Basil Read, the first contractor on the project, went into business rescue in 2018.

A new contractor, named Raubex, took over at the end of last year (2020) and was expected to complete the project by the end of this year. However, Covid-19 continued to unleash unprecedented challenges that made reaching this goal difficult for them.

Now that the country is on alert level 1, most economic activities seem to be back on track. Following an oversight visit to the project by the Minister in the Presidency, Mondli Gungubele, and the Head of Infrastructure in the presidency, Dr Kgosientsho Ramokgopa, on Monday, 21 November, Gungubele estimated that the project should be completed by around March next year.

Gungubele said that the purpose of the ring road was to benefit Musina’s community, the rest of South Africa, as well as the Southern African Development Community (SADC) countries. “We want to ensure that those economic investors who are already in the country stay here and those who want to invest can make those decisions. This will assist our country to move forward,” said Gungubele. He also said that the ring road would facilitate trade in the SADC region.

As things currently stand, Musina town experiences heavy traffic that poses a danger to pedestrians, and the local business community worry about access to their premises. However, once the project is completed, long-distance hauliers are not expected to pass through Musina town anymore, thus easing the congestion.

According to SANRAL’s regional manager, Progress Hlahla, SANRAL is spending about R670 million on the project. Musina’s community benefits from the project in more than one way, as R50 million has been spent on 19 local subcontractors.

Several families, though, have been affected by the construction of the ring road. Thirty-two households had to be moved and were relocated to another compound where SANRAL had built new houses for them. Some of the families, however, now complain about the reduced yard space. The houses themselves apparently also have a number of faults, including leaking roofs and toilets. They also complain about not being compensated for the loss of their previous space, their fruit trees and damage to their belongings during the relocation.

“The roof leaks. We have to shift our furniture around when it rains, in case it gets damaged. The other day I complained about my toilet leaking. It was fixed, but it seems the plumbers did not do a proper job as the leak recurred shortly afterwards,” said Patience Ramalata, one of the residents.

Siko Phillemon Kedami was the last person to be relocated. He said he had not received any compensation for having to give up the space he had occupied before. Apparently, he now occupies a much smaller place. He also claims that his windows were damaged during the relocation.

Hlahla said, however, that SANRAL had already paid for all their losses. He said that, should any of these families have trouble with leakages at their houses, they could contact him.

After their visit to the ring road-project, Minister Gungubele and his team also toured Beitbridge Border Post to get a sense of what the situation was there at the time.