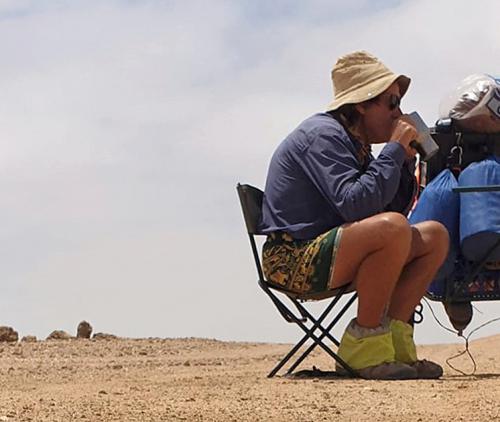 Dave wraps up yet another desert walk adventure

Intrepid adventurer Dave van Graan looked set to reach his Namib coast destination of Henties Bay on Tuesday after yet another of his epic walks, this time from the Epupa Falls in Kaokoland over a distance of almost 800km.

This 64-year-old adventurer set off from Epupa Falls on 21 November this year and, at stages, the going was tough. “The extreme heat was the worst,” Dave told the Zoutpansberger in a WhatsApp message over the weekend. Getting hold of him is not easy, as the route he was following does not have cellphone reception everywhere. He was referring to the 40°C plus daytime temperatures he experienced on his desert trek. “And those Mopani flies! They made me crazy,” said Dave.

Malnutrition was also a bit of a problem. “My food is also not that great. I am hungry all the time. All you eat is soya bean mince, Toppers and pasta. You can also only eat so much Bully Beef!” writes Dave, adding a smiley-face emoji. What he was not smiling about was the fact that the Namibian authorities had refused him a permit to walk through a section of the Skeleton Coast National Park as part of his 800km journey. “This was the biggest disappointment of my trip. I needed to catch I lift through the park, and this after I had initially received permission, but it was withdrawn,” said Dave.

As he neared the finish line this week, however, Dave said that the positive far outweighed the negative aspects of his walk. “Among the highlights of my journey is the unbelievably friendly people of Namibia. Then there was the day I crossed the mountain before Khowarib. It was extremely tough going, with several steep inclines. But that feeling of accomplishment that washes over you if you finish on the other side is absolutely overwhelming!” said Dave.

Dave added that the lodges that had given him a place to sleep were also a real blessing. “You could take a bit of a breather from the walking and the heat. You could also enjoy a decent meal. But I also enjoyed my ‘bush camps’ along the way – to sleep between the wild animals and to enjoy the starry night skies. There is something beautiful about the peace and quiet,” said Dave.

Every time Dave has gone on a walkabout through Africa has been for a cause. This time around, he and his trusted cart called the Bart Mobile Mark2 walked in support of Desert Lion Conservation. “I thoroughly enjoy walking through this hard but beautiful part of the world at my own, slow pace. I did not have one flat tyre and my Bart Mobile is ready for a couple more trips. The fact that I was never injured or got sick was a bonus as this can ruin your trip. I did not even cramp or suffer blisters,” said Dave.

On Monday, Dave was taking a break at Cape Cross Lodge, with just under 60 km to go to Henties Bay. “I will spend my last night in the desert here and am hoping to finish in Henties Bay tomorrow,” said Dave. Asked if he is planned to do a trip like this again, Dave’s answer was a definite yes! “For sure will I do it again! I now have a year to think of something new. Maybe a trip in a donkey cart? It will definitely be easier then pulling this trolley along the whole time. But I will see,” said Dave.

* Just after going to press on Tuesday an elated Dave inform the newspaper that he has reached Henties Bay. “I have been pushing myself hard to reach Henties. But it feels good to be here know,” said Dave. After he was welcomed by the Henties mayor and a journalist from the local paper, Spar treated Dave lunch.