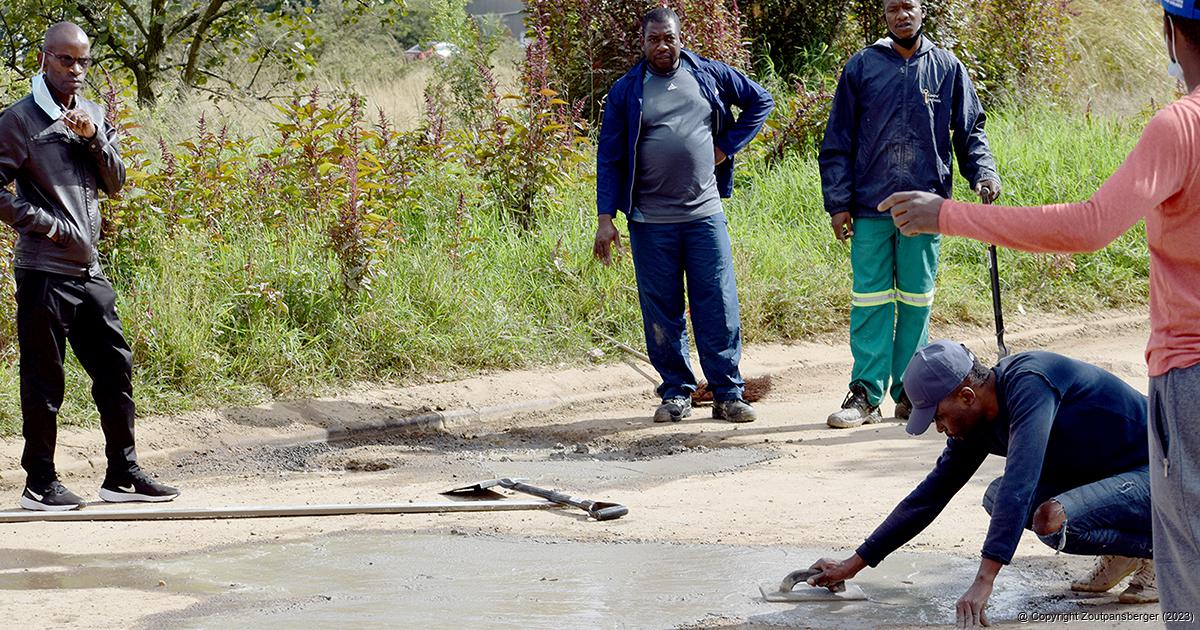 Residents started patching up the potholes themselves at Makhado Park on Monday, 2 May, because they grew tired of waiting for the Makhado Municipality to come out and fix their damaged streets. Photo: Kaizer Nengovhela.

Makhado Park residents say they will fix it themselves

Residents from Makhado Park in Louis Trichardt started to patch up the potholes in their streets themselves on Monday, 2 May, after giving up hope that the municipality will fix the roads soon.

According to the residents, the project was initiated not only to make the streets accessible for motorists again, but also to make a prominent point, namely that the Makhado Municipality is neglecting to maintain infrastructure in the town.

Louis Trichardt’s streets in general have been in a sorry state for years, but the recent rains worsened conditions further, leaving some residential areas, including Makhado Park, practically inaccessible in certain places. The Makhado Park community decided to raise the money among themselves to buy sand and cement to fix the streets in their area, saying that they could not wait for the Makhado Municipality indefinitely to come out and do it for them, as they are supposed to.

One of the community members, Mr Israel Sinthumule, said that, instead of sitting with their arms folded, the community came up with a turnaround strategy. “The residents are under pressure as the Makhado Municipality is failing in its duties. Because residents are not prepared to sit back and watch how their neighbourhoods wane away by erosion, they are taking ownership of these problems themselves,” he said.

The Makhado Park community is appealing to developing partners to chip in and help them rehabilitate their streets. “Many of the streets in the area are so damaged that it is impossible for motorists to use them. This has affected the availability of key services,” said Sinthumule.

According to Sinthumule, the community has approached the municipality several times, asking them to send essential workers out to fix the streets, but nothing came of it. “We have knocked on many doors at the Makhado Municipality, but we were greeted with empty promises each time. We have waited long enough now. We don’t feel like we belong to this municipality.”

Sinthumule said that this initiative to fix their own streets did not mean that they were giving up on engaging the municipality regarding service delivery. They just wanted to show the municipality that even though they did not get what had been promised to them, there were certain things that they, as a community, were able to do for themselves. “We are challenging our municipality, saying that we are entitled to service delivery, like any other community. We should not be side-lined as if we are foreigners. We will not stop engaging them and we will keep on raising these issues whenever there are integrated development plan (IDP) meetings,” he said.

When Limpopo Mirror contacted the ward councillor, Kanukani Maphubu, about this issue, he said that he had met with the Makhado Park community on Sunday, 1 May, where he had explained the municipality’s strategy to the residents. According to Maphubu, the municipality already has plans to rehabilitate streets and to debush long grass. They also have monthly pothole-repair programmes. Maphubu could not, however, say when the municipality intended to start with these projects.