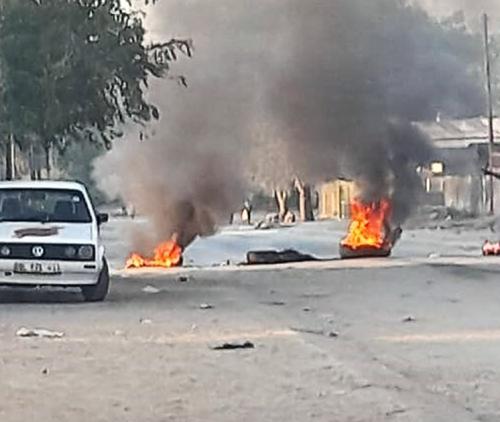 The border town of Musina was again ablaze this morning as frustration over water shortages turned violent and protesters took to the streets for the second time this week.

The situation in Musina has become increasingly intense since earlier this week when residents first took to the streets, burning tyres and barricading streets, including the N1 national road. Residents are protesting about the Vhembe District Municipality’s inability to address chronic water shortages.

On Tuesday one community leader, Binky Sefake, said Musina residents living in townships have not had water for days. No water was provided by way of tankers either. "We do not understand how the municipality [VDM] expects us to live without water. Water is life. Without water, even for an hour, life stops. The most disturbing thing is there is water in town, but nothing at all in [the] townships," said Sefake.

Another Musina resident, Sewani Kaunda, told the newspaper that the water crisis in Musina was man-made. “Musina is going to be on fire because of a man-made water crisis by the Vhembe District Municipality. Remember, they're just closing our water provision willy-nilly while we are paying for water,” said Kaunda.

In response, the Vhembe District Municipality issued a statement on Wednesday regarding the violent protests in Musina.

“Vhembe District technicians are currently at Musina busy fixing the leakages and water tankers will also be supplying water in the afternoon at the affected areas. Fixing of leakages is expected to be completed in the afternoon today [Wednesday] hence pumping will immediately start to fill up main reservoirs. Supplying of water to residents is also expected to start early tomorrow morning. We apologise for inconvenience caused,” reads a statement by VDM spokesperson Mr Matodzi Ralushai. Also on Wednesday, Musina Mayor Godfrey Mawela, was expected to address residents. Police also managed to get the situation back under control.

It would, however, seem that it is a question of too little too late for the residents of Musina. Violence again flared up this morning (12 May) and a strong police presence was visible.

It is not only in Musina where residents are fed up with poor service delivery from Vhembe. Everywhere they are struggling to cope. Louis Trichardt’s water woes also continued this week as taps remained dry.

On Wednesday morning, the VDM released yet another statement indicating that they needed to shut down the Albasini water plant because of another pipe burst in the area north of Stubbs Street along the N1. Apparently, this is now the fourth pipe burst there to be fixed over the last two weeks. This is apart from several other pipe bursts elsewhere on the Albasini supply line.

Accompanying photos show some of the carnage in Musina this morning.