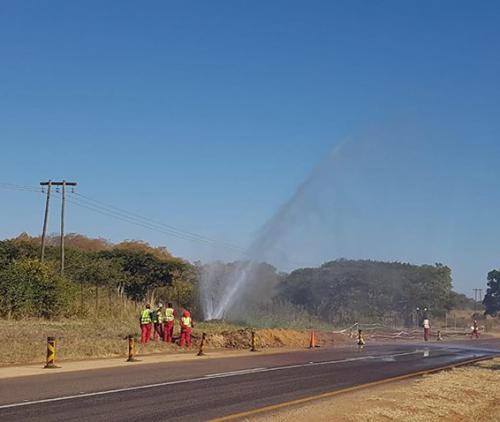 Millions of litres of precious water went to waste since Wednesday following a massive pipe burst on the main supply line from the Albasini dam along the Louis Trichardt/Thohoyandou road. Photo supplied.

Several parts of Louis Trichardt are again without water due to a massive pipe burst on the main supply line from the Albasini dam along the Louis Trichardt/Thohoyandou road.

The pipe burst already occurred on Wednesday and continued throughout the night into Thursday. By Thursday evening taps started to run dry and the newspaper asked Vhembe District Municipality spokesperson Mr Moses Shivambu for an update on the situation.

On Thursday evening, Shivambu indicated that their technicians are attending to the situation. He confirmed that the water pressure was very low and that they would activate water tankers in and around Louis Trichardt from Friday morning.

At the time of this update, the newspaper was still waiting for feedback from Vhembe regarding the latest situation. Several residents, however, indicated that their taps were still dry by 10:00.