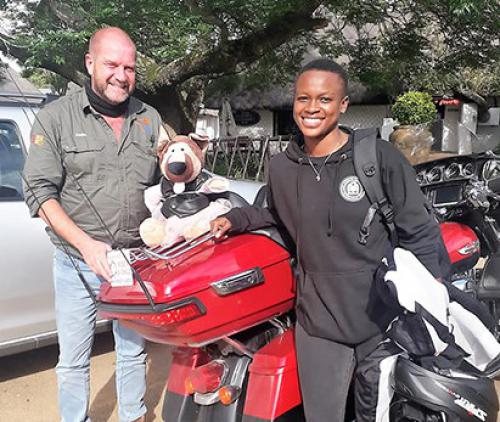 Eventful start to Ride for a Child

Pediatric Care Africa’s second Ride for a Child kicked off in White River over the weekend, with the first couple of days being quite eventful. The aim of this motorcycle ride is to raise much-needed funds for medical treatment and surgeries for vulnerable children in need.

The group of motorcyclists’ first overnight stop was the Lalapanzi Hotel outside Louis Trichardt. “Here we were met by a group of bikers who came out to meet us. To our surprise, the group of bikers included Major Mandesa Mfeka, the first black woman fighter pilot in South Africa currently stationed at AFB Makhado and also a keen biker … it was absolutely fantastic meeting her and all the persons who came out to meet us,” said the group.

The group of bikers aimed to reach the country’s northern-most border, Beitbridge, on day two. The aim is to visit the most northern, eastern, western, and southern corners of South Africa and, by doing that, they are trying to draw a symbolic circle around South Africa to show their support for our South African children in the “circle”.

“We got off to a slow start in the morning, after the N1 North was closed temporarily about 18 km before Louis Trichardt, following an accident involving two trucks on the highway, causing one to burn out completely, and some unpleasant road conditions in [the] Musina area, due to many potholes and stray cattle on the road,” said the group.

In total, the group travelled approximately 522 km on day two, riding from Louis Trichardt to Beitbridge and back again to Louis Trichardt and onwards to Lephalale. “Travelling was slow, due to heavy rains, and in places, bad potholes in the roads. We were all muscle sore but in good spirits when we arrived at our overnight stop in Lephalale,” said the group.

On day three, the group of bikers departed from Lephalale onwards to Rustenburg via Thabazimbi, in sunshine, and the roads and scenery were great, making that part of the tour their collective favourite section so far. At the time of our going to press on Wednesday, the group had departed to Vryburg, via Lichtenburg and Mahikeng.