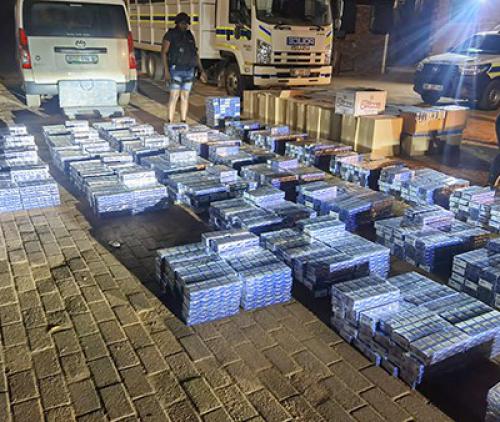 Police received a tip-off about a White Toyota Quantum panel van from Zimbabwe transporting illicit cigarettes along the R521 to Polokwane. The vehicle was ultimately spotted along the N1 road towards Mokopane. Illicit cigarettes with a street value of about R2 million were confiscated. Photo: Limpopo SAPS

The Limpopo police have made several arrest in their continuous crime-busting operations for the week ending on Sunday, 19 September. Among those arrested were two alleged child rapists.

The two rape suspects, aged 18 and 27, were arrested on Saturday, 18 September, by the Malamulele SAPD outside Thohoyandou for allegedly assaulting and raping a 16-year-old Grade 10 learner at Roodhuis village. “The suspects reportedly met the victim walking with friends on Friday, 17 September, at about 20:30. They allegedly grabbed her and pulled her to the nearby bushes, where they severely assaulted her and then took turns in raping her. The victim managed to find her way back home and informed her grandmother, who in turn called the police,” said provincial police spokesperson Brigadier Motlafela Mojapelo. The suspects were traced and arrested.

The Limpopo police also made several major drug busts during the period, predominantly in Polokwane. On 15 September, members of the provincial Organised Crime Unit and Tracing Team arrested three foreign nationals aged between 27 and 42 in the Polokwane policing area for possession of and dealing in drugs. The police received a tip-off and followed up on the information, which led them to a house owned by one of the foreign nationals in Bendor, Polokwane. The house was searched and 50 sachets of nyaope to the value of R2 000 and 15 grams of crystal meth with a street value of R15 000 were found. The owner of the house was arrested on the spot.

In another incident, a 42-year-old man was arrested in Thornhill, Polokwane, for possession of crystal meth with an estimated street value of R100 000, pure Heroine valued at R200 000 and "Boss" mandrax tablets with an approximate street value of R26 000.

In the last incident, police followed up on information that yet again directed them to Bendor, where a 29-year-old suspect was arrested for possession of 100 grams of crystal meth with a street value of R100 000. A silver-grey Mercedes Benz was also seized on site.

In a separate incident, a 29-year-old suspect was arrested by the Modjadjiskloof police for a house robbery that occurred in the area on 17 September, just after midnight. “The members received information from a local security company about three suspects armed with rifles, who had just committed house robbery. The suspect was arrested at about 06:00 at a house in Makgolobotho village, following a positive tip-off. Some of the stolen items, including a fridge, stove, electrical appliances, clothes, blankets, bicycles, grinders, solar power batteries, etc were recovered. Police further confiscated three pellet rifles,” said Mojapelo.

In an effort to fight against smuggling and the possession of and dealing in illicit cigarettes, members of the Limpopo Highway Patrol arrested another three foreign national on 14 September at Masodi Village in the Mahwelereng policing area after they were found transporting illicit cigarettes. The police received a tip-off about a White Toyota Quantum panel van from Zimbabwe transporting the cigarettes along the R521 to Polokwane. The vehicle was ultimately spotted along the N1 road towards Mokopane. Illicit cigarettes with a street value of about R2 million were confiscated.

Provincial Commissioner of Police in Limpopo Lieutenant-General Thembi Hadebe has commended the members for these successes and has thanked community members for continuously assisting the police in the fight against crime.