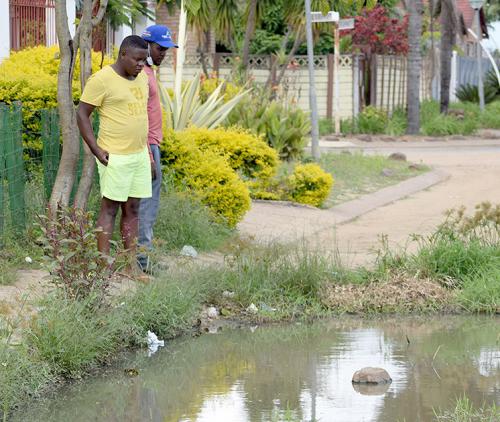 For more than six years now, residents of Makhado Park in Louis Trichardt have had to endure a persistent sewage spillage that has formed a permanent, foul-smelling dam in Troupant Street, and the community members blame the municipality for neglecting to sort out the problem.

Residents say they had complained about the same thing to the Makhado Municipality and the Vhembe District Municipality (VDM) time and again over the past six years, but with no help forthcoming. They believe that the smell from this raw sewage alone is a health hazard to them and their children.

Mr Nkhangweni Mudau, who resides at Makhado Park, said that, during the recent summer rains, the drains overflowed, and the sewage ended up in their homes. “It was a total mess! I am confused now. This lack of service delivery tells us to open our eyes. It’s hard for us in Makhado Park. I feel like vomiting every time I try to eat,” he said indignantly. “It has been like this for years. We have tried to engage the municipality, but they merely ignore us. We are really suffering. The stench is affecting our health.”

Another resident, Mr Collen Maiyiane, said that the constant sewage spills caused wastewater to end up in their yards and damage their properties. “Every time we are faced with the same challenge of an overflowing drain. I believe that it is a sign that not all necessary measures and precautions are taken by the municipal workers to ensure safety and efficient service to our community. Our health is compromised as well as our children’s safety. We want the municipality to come and assist us before it is too late. It is really bad. We have to keep the windows closed to keep the smell and the flies out. When it is hot, I go out and pour disinfectant over the yard, just to contain the smell. It has really been hell to live like this,” Maiyiane said.

VDM spokesperson Mr Matodzi Ralushai said they had dispatched technicians to Makhado Park. “We will get to the bottom of the problem and hope it will be dealt with once and for all,” he said.