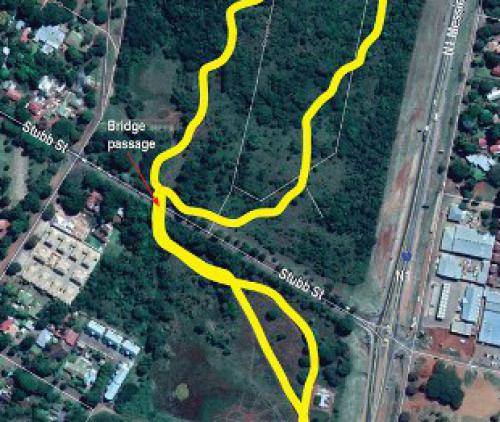 A map of the parkrun route, starting and finishing at the tourism information centre at the Songozwi Street/N1 junction.

Nine-time Comrades Marathon winner Bruce Fordyce will not only attend but is also expected to take part in Louis Trichardt’s first ever parkrun this coming Saturday, 9 February, from 08:00.

The concept of parkruns is simple: You turn up every Saturday and run 5km, or if you are a junior, then 2km every Sunday. How fast you go does not matter and neither does what you are wearing. What matters is taking part.

The first ever parkrun was in Bushy Park, Teddington in the United Kingdom, when 13 intrepid parkrunners got together on 2 October 2004. The volunteer team included Paul and Joanne Sinton-Hewitt, Duncan Gaskell, Simon Hedger and Robin Drummond. It took nearly two years before parkruns spread beyond Bushy Park. Wimbledon was the chosen venue and they had to prove to themselves that they could manage more than a single event at a time. This was the start of the ‘cookie cutter’ approach to events that would allow parkrun to expand.

To begin with, they collated all results on paper and the finish tokens were washers from the local hardware store! But eventually they ramped up the technology, and so the parkrun registration and barcode result system was born. Now, many thousands of runners are processed, websites are updated, and emails are sent each week. The parkrun community is growing all the time – but everything is still based on the simple, basic principles formed from the start: weekly, free, 5km, for everyone, forever.

Fordyce is the CEO of Parkrun South-Africa. He introduced the parkrun concept to South Africa in 2011, with the first run taking place at Delta Park in Johannesburg in November of that year. Twenty-six athletes attended the first run, but today, between 40 000 and 60 000 athletes takes part in the parkrun at 150 venues across the country. Louis Trichardt will be the latest addition to the growing list.

“If you want to be ‘timed’ this weekend, you would need to register online by visiting https://www.parkrun.co.za/register/form/,” invite the organisers.

All walkers, joggers, runners, young and old, with or without your pet, or with a pram, are welcome to take part. Participation and registration are free!” say the organisers.