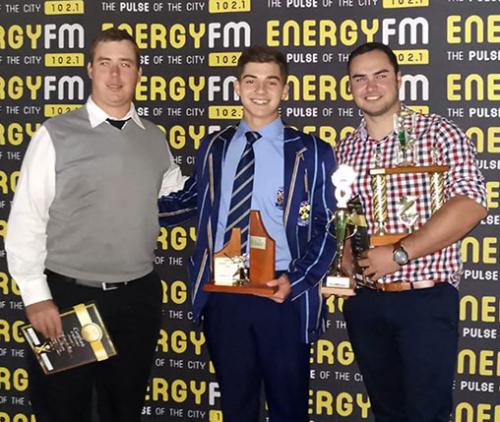 Three of the Louis Trichardt players who received trophies during Friday night's Limpopo Impala Cricket prize-giving function. From left are Dirk van den Berg (best bowler in both the T20 and the promotional league), Gerhardus Fourie (best U/17 player) and Dewald Joubert (best batsman in the promotional league). Leon Olwage (best batsman in the T20 league) was absent when the photo was taken. Photo supplied.

Players from the Louis Trichardt Cricket Club were awarded several of the top trophies during the Limpopo Impala Cricket prize-giving function last Friday.

The Louis Trichardt XI side won the province’s promotional league the past season. The trophy for the best batsman of this league went to Dewald Joubert of Louis Trichardt, while his team-mate, Dirk van den Berg, won the trophy for best bowler of the league.

Louis Trichardt showed the past season that it can field a very competitive side. In the T20 league the team won the Vhembe District round-robin competition. The team came up against Seshego, the winners of the Capricorn District, in the semi-finals of the competition. Seshego won this encounter and then continued to win the final match.

Another player from Louis Trichardt, Gerhardus Fourie, won the award as the province’s U/17 Player of the Year.