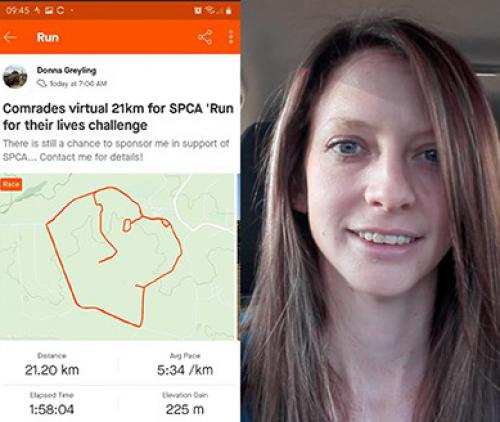 The route (left) Donna Greyling ran in the shape of a dog’s head.

Bitter cold did not stop Donna from running for their lives

Challenges during the lockdown have come in all forms - from swallowing raw eggs to downing vinegar. Some of the challenges, however, are also extremely positive.

In the Zoutpansberger’s edition of 4 May, the SPCA’s Run for their Lives Challenge was announced. This challenge was the brainchild of local Elize Pretorius, who decided on the very first day of the lockdown to adopt a puppy for her daughter. She realised that the SPCA depends on donations, and even more so during this lockdown period as this organisation does not close its doors.

She took on a five-kilometre run herself and then challenged five more people to exercise and get sponsors per kilometre, per metre and so on. The SPCA is now extremely grateful for all the donations that have been received during this time. “The community was so enthusiastic about this and many people participated in different types of exercises, even on horseback and on the trampoline,” said Alicia Thomas of the SPCA.

Coinciding with the online “Comrades” that took place on Sunday, 14 June, runner Donna Greyling decided to accept the challenge from Schalcha Erasmus, who had nominated Donna, and planned a route on some farms near her house in Levubu. This route took the shape of a dog’s head. “I was planning this route for about a week with the help of Google Maps,” Donna said.

Donna, a medical doctor who works and studies in Polokwane, lives on a farm in Levubu, where her husband works. She loves to run and was thinking of the possibility of doing a route in the shape of a dog’s head. The outside was quite easy, but the details, such as the ear, eye, and nose, were quite challenging. She had to do some “bundu bashing” for some of these parts. To be on the safe side, she put ribbons as markers in the areas that she was not so familiar with to keep on track on Sunday. She started early in the morning (when the temperature was only about 6°C) and completed the 21.1 half-marathon. Donna said the effort was most enjoyable. Her husband dropped her at the tip of the “ear” and she ran her way through to the top of the ear, down to the forehead, eye, nose, and around, ending at her house, where the ear joins the top of the head.

Donna did the Comrades once, in 2017. She admits that, even if she had had the chance to do the “real” comrades this year, she would not have been fit enough. “About 10 people responded to my request for sponsorships, and I’m very grateful towards them. I have a soft spot for the SPCA animals as we also adopted our one dog, Skyla, about seven years ago,” said Donna.

“Once Donna’s sponsorship money has all been paid into SPCA Louis Trichardt’s account, the person who raised the most money will be announced and the prize will be handed over,” said Alicia.

The SPCA committee thanked everyone once again who had accepted the challenge. “The annual golf day is not taking place and the SPCA is therefore very dependent on any form of donation or income. You are helping us to make a difference in the lives of those who cannot speak for themselves in a difficult time like this,” said Alicia.