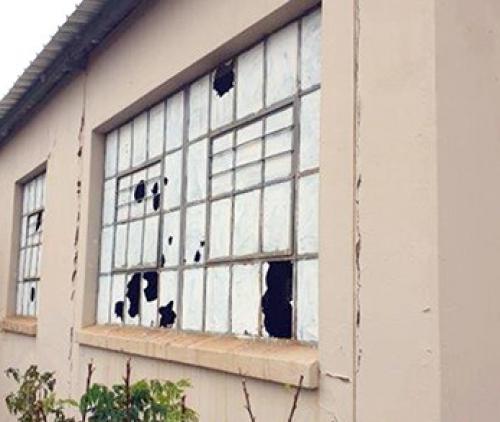 Believing that the sports hall would be demolished, clubs such as the gymnastic club moved out of the property. This allowed people to start vandalising the unoccupied property. Photo supplied.

Several Louis Trichardt sport clubs are going nowhere slowly, i.e. those that were earmarked for relocation as part of a deal struck between the Makhado Municipality and the Masingita Group of Companies for the expansion of the Makhado Crossing Mall into a regional shopping centre.

News that the Makhado Municipality is in the process of selling the stretch of land accommodating most of the town’s sporting facilities east of Makhado Crossing first broke in 2015. At that stage, the area earmarked for the sale housed the town's rugby fields, the squash, gymnastics, jukskei and wrestling club buildings, the sports hall and netball fields. The deal with the Masingita Group of Companies, in partnership with Investec Properties and with Italite as the holding company, entailed relocating the above clubs at the developer’s cost.

By the time the Makhado Crossing regional mall finally opened in November 2019, only the rugby, soccer and jukskei clubs were successfully relocated by Masingita, while the future of the squash club and the clubs making use of the sports hall, namely the gymnastics, badminton and wrestling clubs, remained uncertain.

These clubs’ uncertainty grew worse over the last couple of months as their facilities started to fall into serious disrepair. This includes damage to the sports halls’ roof after a violent storm and cracks in the walls of the squash club and sports hall, caused during the bulk earthworks compaction process of the new shopping mall. Frustration levels peaked for members of the gymnastics club after they suffered severe water damage to their equipment and opted to rather move out and find new premises to practice. “We were instructed to move out of the hall anyway as we were told that it was going to be demolished,” said Ms Elzabé Stewart of the Louis Trichardt Gymnastics Club.

The past few weeks, rumours started to surface that Masingita no longer has any intention of developing the area still housing the squash, badminton, and wrestling clubs. The newspaper then asked the Makhado Municipality if there was any truth to these rumours.

Municipal spokesperson Mr Louis Bobodi responded by saying that Italite (the holding company) had written them a letter on 22 September this year, indicating that they were willing to donate the land back to the municipality. “Italite Investment (Pty) Ltd has no future intentions to cause any developments on the part of the land in question. As long as the Makhado Municipality agrees to receive the proposed donation offer back to the municipality then the issue of relocation will be attended to. Currently, the land belongs to the Italite Investment (Pty) Ltd and they are the ones who are responsible for the infrastructure upkeep,” said Bobodi.

Regarding the issue of maintenance, Ms Landi van Deventer, head of marketing at Masingita, said they would ensure that the buildings were brought up to standard for use, with immediate effect. “We will also be carrying out the maintenance on the buildings until such time of transfer to council. We would like to confirm that we have already facilitated the replacement and repairs of the roof due to weather-related damages on the gymnastics hall at a cost borne by the developer,” said Van Deventer. “We are incredibly dedicated to the Makhado community and have shown this in the past with the redevelopment of the dilapidated and non-compliant outdoor sporting facilities with an investment of multi-million rand into the project, transforming them into safer and world-class facilities along with various other services, upgrades which benefit the communities, town and public safety,” said Van Deventer.

Asked whether the municipality had accepted Masingita’s offer, Bobodi said last week that they had not yet responded.

Not the only uncertainty

This has been a difficult time for all sport clubs making use of municipal facilities. Apart from the uncertainty the past couple of months about being relocated (or not), the Makhado Municipality has embarked on a process of trying to revoke their 99-year lease agreements with all these clubs.

Many might wonder about the reason for this move. The Makhado Municipality best answered this question. “The whites-only predecessor of the Makhado Municipality, Louis Trichardt Local Authority, has during the period 1993, 1994 and 1995, just at the dawn of the new constitutional dispensation, concluded 99-year lease agreements with the whites-only sporting clubs. Ever since the establishment of the Makhado Local Municipality, Council has questioned these dubious decisions by the former Louis Trichardt Council as it smells [of] racial discrimination. Council has previously commissioned two legal opinions which both of them confirmed, that if the lease agreements can be concluded on a breach of the material provision of the lease agreement, that it be expropriated by the municipality for public interest,” states the municipality in its minutes under the above item.

The initial council resolution (ITEM A.25.28.03.19) stipulated under paragraph 2 that the issue of terminating the agreements must “be referred to the Section 79 Committee: Disaster, Moral Regeneration, Sports, Arts and Culture to advice on valid reasons that can be implemented to terminate the 99 year lease contracts of the eleven (11) respective local amateur sport clubs.”

The matter was on the agenda once more during the 94th Council Meeting of the municipality, held on 12 August 2020. The municipality’s plans to have the 99-year lease agreements terminated had apparently hit a snag.

Feedback is given on the issue under ITEM A.92.12.08.20. “When this matter was considered Cllr A Matumba remarked that the recommendation of the Section 79 Portfolio Committee for Sport did not address the matter at hand as per Council Resolution A25.28.03.19, paragraph 2,” the minutes of the meeting state. In the absence of “valid reasons” for the termination of the agreements, the matter was referred back to the relevant portfolio committees to go and find “valid reasons”.

The squash club and sports hall suffered cracks as a result of the bulk-earthworks-compaction process of the new shopping mall. Photo’s supplied.