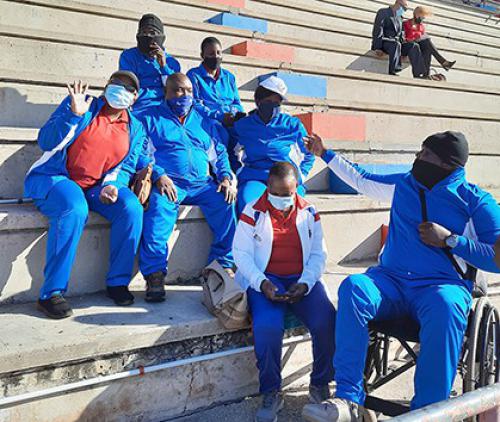 Members of the para-athletics team who represented Limpopo during the past weekend’s South African Sports Association for Physically Disabled persons (SASAPD) national championships, which took place in Gqeberha (Port Elizabeth). In front, from left to right, are Elizabeth Shikwambana and Vumbani Masakona. In the middle are Olga Maboya, Hendrik Nemurura and Vidah Muthabi. At the back are Ntsieni Mbambane and Nthambeleni Manavhela. Photo supplied.

The IsAbility Sports Club can be proud of the achievements of several of its local athletes during the South African Sports Association for Physically Disabled Persons (SASAPD) national championships that took place in Gqeberha (Port Elizabeth) on 26 and 27 April.

Last year’s championships were cancelled just four days prior to taking place when South Africa entered its first severe lockdown. The past weekend’s event can therefore be regarded as the 2020 championships.

Because of the effect of the coronavirus on all school activities in 2020, learners were not able to train adequately, so most provinces, including Limpopo, did not send a junior team.  A group of five Limpopo senior athletes attended the event, namely Vumbani Masakona, Ntsieni Mbambane, Hendrik Nemurura, Vidah Muthabi and Nthambeleni Manavhela. They were accompanied by team manager, assistant team manager and coach Sandy James, Elizabeth Shikwambani and Olga Maboya. Mr T Phungo from the Limpopo Sports Academy also accompanied the group, together with team physiotherapist Gerald Mabetlela, courtesy of the Limpopo Academy of Sport (Vhembe District).

“While the SASAPD national champs usually host about 700 athletes, this was a small event of just over 200 athletes, due to corona issues,” said James. Despite the pared down scale, a couple of world and South African records were broken by some of the top South African athletes.  Local athlete Sheryl James, who was on the starting lists, was unable to participate as a result of a slight injury from which she is recovering. “The Limpopo senior athletes, who have had minimal training due to corona and due to a lack of facilities and implements where they reside, achieved remarkable results in spite of these challenges,” said James.

The five Limpopo athletes brought home four gold medals, two silver and one bronze.  Vumbani Masakona, in the F55 category, achieved gold in all three of his field events (javelin, discus and shotput). Hendrik Nemurura (F57) achieved silver in both the javelin and the discus. Ntsieni Mbambane threw for gold in the javelin category F42, while Nthambeleni Manavhela achieved bronze in the javelin category F44. Vidah Muthabi, who competes in class F43, managed to throw a new South African record in the javelin, but because the categories were combined and ladies with different forms of impairments competed against each other because of fewer participants, she was unable to gain a medal for this excellent achievement.

“People with disabilities who would like to learn more about opportunities to participate in sports activities can contact the IsAbility Sports Club Limpopo 084 506 3333,” invited James.