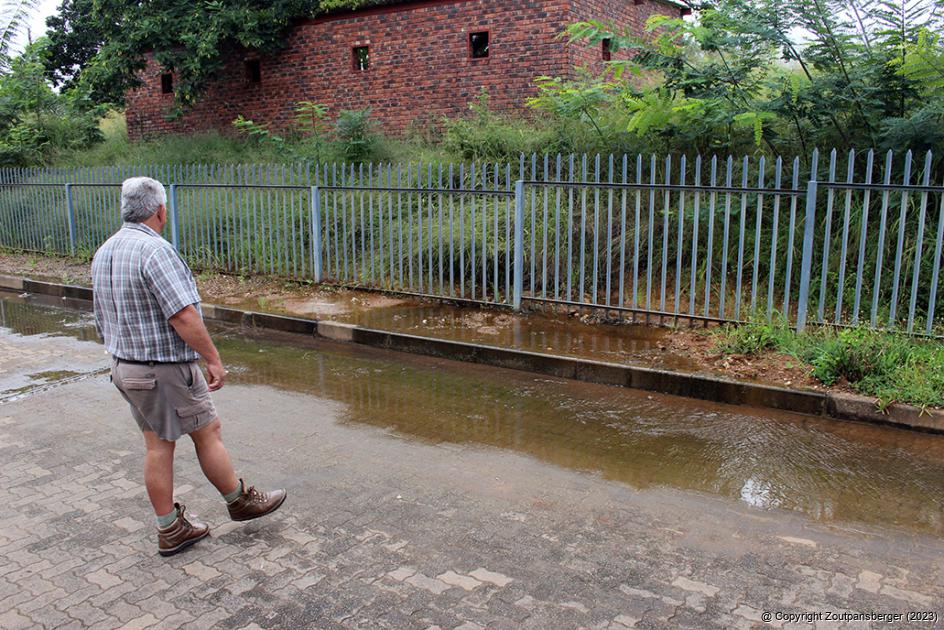 Mr Pieter Uys said the water leak at Makhado Crossing had been ongoing now for four months, despite his reporting it numerous times to the authorities.

Many residents in Louis Trichardt are wondering whether water restrictions are still in place as there seems to be no shortage of water.

The issue is not, however, the recent good rains that fell over the region. No, people are specifically referring to water leaks that are being left unattended for weeks on end by the Vhembe District Municipality (VDM).

The Makhado municipal area is constantly plagued by VDM’s inability to ensure a continuous water supply to the town and surrounding areas. Many residents therefore find it very upsetting that VDM can waste good-quality drinking water, in some case millions of litres at a time.

The past week, the Zoutpansberger was contacted by local businessman Mr Pieter Uys of Noorde Wapens in the Makhado Crossing centre. “Come take pictures and show the people how water is wasted here in town,” said Uys.

Upon arrival at Makhado Crossing, the Zoutpansberger was taken to the business parking area behind Makhado Crossing, which is adjacent to the Louis Trichardt Rugby Club. What resembled a huge water feature proved to be a massive water spill. “It’s been leaking clean drinking water like this for the past four months,” said Uys. Evidence that the leak was not a new one could be seen from the green algae that had started to form along the pavement under the continuous stream of water flowing into the centre's storm-water drainage system. “I have wished on numerous occasions that I could catch the water and take it to my farm to irrigate my plants. Millions of litres must have gone to waste over the past few months,” said Uys.

As to the source of the water, Uys said they were not sure where the water was coming from. He was, however, sure that it was municipal water. “At some stage we thought it was a spring that had started to flow again after the recent heavy rains. However, the water stopped flowing as soon as the town's taps dried up,” said Uys.

The Zoutpansberger went to investigate and soon found the source of the water. Close to the Rugby Lapa's hall, a huge hole (about a metre-and-a-half deep, two metres long and a metre wide) was found. It was filled with clean water flowing out in a steady stream. From there it has been filtering down to Makhado Crossing, eventually pouring out of the ground as a man-made spring. That this was not a new excavation was obvious as vegetation had started covering up the dirt initially washed from the hole.

The Zoutpansberger made a short video of the water leak and also took some pictures. These pictures were sent to the municipal spokesperson for VDM, Mr Matodzi Ralushai, for comment. He indicated on Tuesday that the matter had been forwarded to their operations and maintenance management for intervention.

The Zoutpansberger went to investigate and soon found the source of the water. Close to the Rugby Lapa's hall a huge hole (about a metre-and-a-half deep, two metres long and a metre wide) was found. It was filled with clean water flowing out in a steady stream.