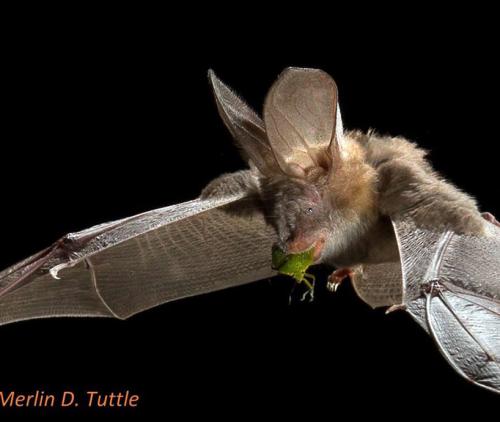 The macadamia industry could be saving themselves millions of rands in possible crop damages by using bats to control crop pests. Photo supplied.

A collaborative research project between Green Farms Nut Company (GFNC), South Africa’s largest privately owned processor and marketer of macadamia nuts, four of their suppliers, the macadamia industry body SAMAC, and the University of Venda (Univen) is proving the commercial value to the industry of using bats and birds to control insects that damage the crop.

GFNC has made orchards on two of the farms owned by Green Farms director Alan Whyte in the Levubu area available to the research project. Three of its suppliers, viz. Fritz Ahrens, Jaco Roux and Alistair Stewart, and his farm manager, Branden Jardim, all in the Levubu, Thohoyandou and Louis Trichardt areas, are also participating in the project. Researchers Valerie Linden and Sina Weier have put up 48 cages in trees on the six farms.

One set of cages keeps birds and bats from feeding off the insects on and around the trees. A second set enables both bats and birds to access the insects day and night. The third set of cages is closed in the evenings, to exclude bats and nocturnal birds, and the fourth set is closed in the daytime, to exclude birds that are active in the day. The nuts from the caged trees are then sampled to establish the percentage of damage caused by insects under these controlled conditions.

Linden and Weier have been trained at the GFNC sampling facility at its Levubu factory to identify the specific types of damage caused by the various insects. Weier is also focusing on the feeding patterns of the bats and birds, using their droppings to establish which insects they are feeding on in the orchards that are part of the study. This information will enable farmers to provide the right environment for encouraging specific bird and bat species to develop colonies around their orchards.

“Before we started the study, we knew that the bats were feeding on false codling moths and stinkbugs,” says Linden, whose focus is the caged trees. “We’ve since established that certain species will also feed off the stinkbugs and that the bats will catch the insects in the air and take them off the leaves of the trees. Various species of birds have the same habits,” said Linden.

Linden said that, based on this behaviour, and the kernel damage patterns, they had seen clearly this season that the bats and birds made a definitive contribution to reducing crop damage. Where bats and birds were excluded from the trees, kernel quality dropped. “We expect that biological control through the use of bats and birds will reduce the need for farmers to spray their trees. In turn, this will cut their production costs. And, because they will have less kernel damage, a higher percentage of their crop can be processed for export. Taken together, the savings on costs and the ability to market more of their crop will make their operations significantly more sustainable,” said Linden.

The project has been designed and is being managed by Univen’s South African Research Chair’s Initiative (SARChI), and results from the first year of the project, which covers the 2016 and 2017 macadamia-growing seasons, already provide clear evidence that crop damage increases when bats and birds are excluded from orchards. The damage is caused by stinkbugs, moths, and nut borers.

Professor Peter Taylor, SARChI chair and supervisor of the project, said that stinkbug damage to macadamia orchards in South Africa was estimated to be between R50 million and R100 million per annum. “Economic models of the ‘avoided costs’ of bat predation on stinkbugs due to predation by bats on and around macadamia nut trees suggest that the current level of stinkbug damage would be doubled if bat populations in orchards were to become extinct. Any efforts to retain bat populations, through use of safe pesticides, retaining natural vegetation corridors and bat houses, should be strongly encouraged,” said Taylor.