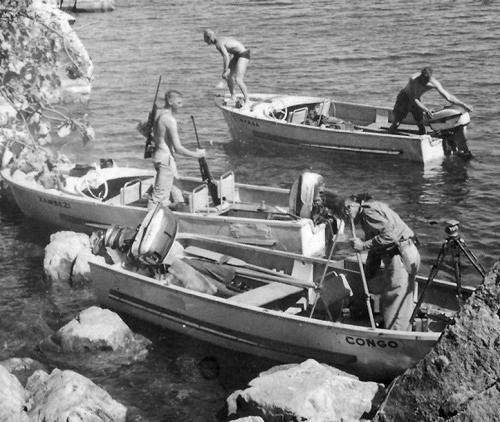 This year marks the 60th anniversary of the first trans-African waterway expedition. The late Dr Daan Marais, a well-known resident of the Soutpansberg, led the first successful east-west transcontinental crossing of Africa via navigable bodies of water.

As a young man, Daan toiled with the idea of travelling across Africa on water for many years. He began an extensive investigation of the terrain, travelling conditions and political stability of the countries they would visit one year prior to the actual departure. He then commissioned Prodorite in Johannesburg to build the boats, searched for suitable support vehicles and began assembling a team.

The group set out on 1 June 1958 from the port of Chinde, in the Zambezi estuary on the Indian Ocean, to pioneer and charter an inland journey via navigable bodies of water. They reached the Atlantic Ocean at Banana Point in the mouth of the Congo River on 23 August 1958.

The primary purpose was to survey the route to determine the potential development of an equatorial water highway, providing arterial links for commerce and industry between the two oceans. The secondary objective was to study and collect scientific specimens, particularly within the fields of parasitology, ornithology and anthropology.

The 12-member party represented diverse scientific disciplines and carried the approval of various organisations, including the Council for Scientific and Industrial Research (CSIR), the South African Institute for Medical Research (SAIMR) and an international body of scientists. They were requested to collect data and document significant findings en route, in exchange for assistance and technical support from the scientific establishments.

Using three small fibreglass boats, they crossed the equator twice via three lakes and seven rivers. An overland support team with a Willys Jeep and a Dodge Power Wagon transported equipment, provisions and fuel and provided portage over impassable areas.

The trip took 84 days to complete. Although the waterborne crew travelled 5 794 km from the Indian Ocean to the Atlantic Ocean, the boats were hauled overland for a mere distance of 322 km. The group established that by constructing 386 km of locks and canals between Lake Nyasa (Malawi) and Lake Tanganyika, a transcontinental passage for vessels of modest burden might be possible in the future. Only two series of rapids in the Congo River, one through the Crystal Mountains and the other at the Stanley (Boyoma) Falls, prevented watercraft from crossing into central Africa.

The South African Academy for Science and Art awarded the prestigious Eugène Nielen Marais Commemorative Medal to Daan in 1995, in honour of the expedition.

Daan’s daughter, Lynne Ras, wrote an exceptional book about the expedition. The manuscript took four years to complete as the content was compiled from verbal accounts by Daan, handwritten notes recorded by Piet Greyling, extracts from other books, newspaper reports and articles from magazines.

The book, “In Search of an Equatorial Water Highway”, follows the journey of the 12-member expedition party attempting to cross the African continent by water. Set in 1958, the story outlines the arduous trip and portrays the team’s determination to succeed. It highlights their misfortune and anguish, describing how they improvised to overcome adversities. The content alludes to the essence of human nature, recounting camaraderie, occasional conflicts and humorous squabbles. This factual account of the first Trans-African waterway expedition reflects the courage and perseverance of a small group of men and women intent on achieving the almost impossible.

“I was asked to assist with proofreading the first manuscript that Lynne brought to the print shop. Her writing style is unusual and very soon began to appeal to me. Her minutely detailed and fluid account of her father’s expedition, which had taken place so many years ago, was so gripping that I became a hopeless proofreader as I followed the team through their tribulations and joys! What a wonderful tribute Lynne has paid to her late father, Daan Marais, and all the members of that heroic team,” said local historian and tour guide Charles Leach.

The book is available at Leach Printers in Louis Trichardt or directly from Lynne at R200 each. Please refer to the website www.ftawe.co.za or e-mail Lynne for further information on info@ftawe.co.za

The cover of the book In Search of an Equatorial Water Highway, written by Lynne Ras, daughter of Dr Daan Marais, a well-known resident of the Soutpansberg, who led the first successful east-west transcontinental crossing of Africa via navigable bodies of water. Photo supplied.

An overland support team with a Willys Jeep and a Dodge Power Wagon transported equipment, provisions and fuel and provided portage over impassable areas. Photo supplied.