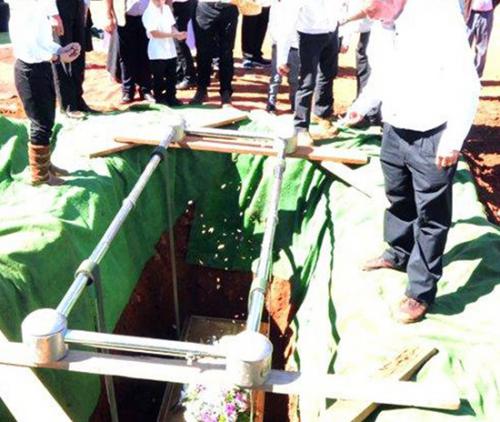 The Makhado Municipality dug such a massively wide grave that the undertakers had to construct a special platform (in the foreground) from which to lower the coffin. Photo supplied.

The Makhado municipal cemetery in Louis Trichardt is nothing more than a complete embarrassment to the town and its people.

This has become the view of many. The cemetery has deteriorated into a state of almost complete disrepair. Not only is it overgrown, it has also become a haven for muggers and thieves literally leaving no gravestone unturned to make a quick buck. Gravestones are stolen for cash while even the plastics flowers on graves keep on disappearing. None of this, however, comes close to the nightmare that a family and their friends had to endure on 14 May.

Mr Dries Vermeulen from Tzaneen said that they were in Louis Trichardt on that day to pay their final respects to his mother. What greeted them at the gravesite was shocking. “On our arrival at the gravesite we noted that the grave was not a nine-foot grave as requested. This would have serious implications, should my dad pass away within the near future. We requested that he would be laid to rest on top of my mother,” said Vermeulen.

But that was not all…

The grave had been dug so wide that the undertakers, AVBOB Makhado, had to improvise a special rig to enable them to lower the coffin into the grave. “They didn’t dig a grave, they dug a swimming pool,” said an irate Vermeulen.

Just over a month before, on 11 April, Vermeulen, family and friends had another funeral, that of his mother’s sister. “During her funeral it was noted that the empty grave next to her was so close that we thought the walls were going to collapse … we never thought that we would be back to go and lay my own mother to rest just a month later,” said Vermeulen. He added that when they returned for his mother’s funeral, somebody had stolen all the plastic flowers on her sister’s grave.

“We as a family were shocked to see the lack of respect shown towards the dead and their families, as well as the lack of attention given to grave preparation,” said Vermeulen. He said that they noticed that graves were not even being dug in straight lines anymore. “There is no discipline whatsoever in the outlining of graves. It seems like they just dig graves without having any concern about the families who need to go and lay their relatives to rest there,” said Vermeulen.

Vermeulen said he and his family felt dehumanized by the municipality’s actions while battling with the loss of two loved ones. “We feel there is no more value in laying someone to rest,” said Vermeulen.

But the family had to endure even more trauma.

The ground needed to fill up the grave again on the day of the funeral had, for some reason, been dumped more than 10 meters away from the grave. Vermeulen said they ended up having to borrow shovels from a nearby local business to try and fill up the massive grave. “We walked up and down, shovel by shovel, and eventually missed most of the family who were gathering at the church. At one point, the church phoned us and said that they needed to close,” said Vermeulen.

That was still not the end of their ordeal…

Two days after his mother’s funeral, Vermeulen said, they returned to the cemetery to make sure the municipality had completely covered the grave. “I found that cattle had walked all over her grave, which is totally unacceptable and disgraceful,” said Vermeulen.

In response to Vermeulen’s ordeal, Makhado municipal spokesperson Mr Louis Bobodi said that he agreed that what had transpired at the graveyard showed a total lack of respect. He confirmed that the municipality themselves are the ones who dig the graves and that this function is performed by the cemetery caretaker. “The caretaker is to be reprimanded and given further training,” said Bobodi. He added that, for the umpteenth time, all their equipment at the cemetery was out or order, resulting in a backlog of maintenance.

Despite the ordeal suffered at the hands of the Makhado Municipality, Vermeulen has high regard for AVBOB. “On behalf of myself and the family, we praise AVBOB for their amazing service and respect showed to us during this difficult time,” said Vermeulen.

Two days after his mother’s funeral, Vermeulen said, they returned to the cemetery to make sure the municipality had completely covered the grave. “I found that cattle had walked all over her grave, which is totally unacceptable and disgraceful,” said Vermeulen. Photo supplied.

The soil needed to full up the grave again on the day of the funeral had, for some reason, been dumped more than 10 meters away from the grave. Vermeulen said they ended up having to borrow shovels from a nearby local business to try and fill up the massive grave. Photo supplied.