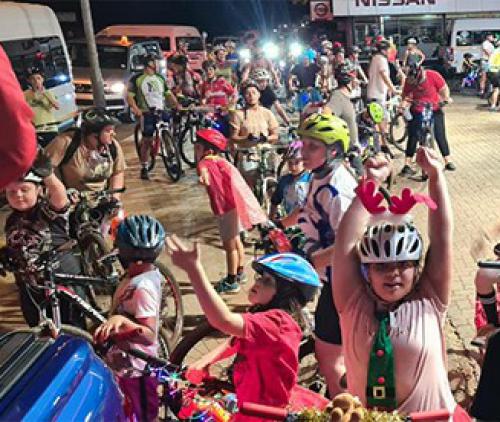 The streets of Louis Trichardt were transformed into a sea of colourful, flashing Christmas lights as cyclists took to the streets during the Soutpansberg Cycling Club’s annual Jingle Bell Toy Ride last Friday.

The organisers were pleasantly surprised by the number of participants, almost double those of last year. The cyclists set off at Makhado Crossing, with stopping points at Thompson's Motors, Mount Fuji, Ocean Basket and Timbercity. The entry fee was a toy. Toys collected will be used to brighten up a less fortunate child’s Christmas, just as the cyclists’ lights on their bicycles brightened up the evening.

The Soutpansberg Cycling Club expressed their gratitude to all the sponsors who made the event possible, including Premjee’s for the sweets, Mike's Kitchen for the burger special, Timbercity and VW Thompsons (Stanley for the help with vehicles). They especially thanked the Louis Trichardt community for the toys and participation. Some cheered as the cyclists cycled past their houses in their colourfully decorated bicycles. “We know your contribution will put a big smile on children’s faces this Christmas,” said the club.

Toys collected will be used to brighten up a less fortunate child’s Christmas. Photo supplied.